January 24th, 2018: Originally built in 1884, Clontarf seawater baths was a popular swimming destination for Dubliners over many years. It closed in 1996 but now is to re-open after a €2.4 million make-over. Video: Bryan O'Brien 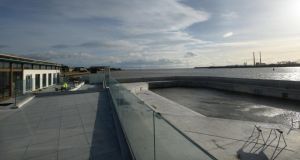 The owners of the 132-year-old Clontarf baths, which reopened earlier this year following a €2.4 million refurbishment, have been ordered to scale back their on-site restaurant.

Publican and hotelier David Cullen last February opened a restaurant and bar at the north Dublin seafront site following a two-year construction and renovation project that included the restoration of the open-air seawater baths.

The baths, which closed more than 20 years ago, were not initially reopened, but did open at the start of the summer for use by members of the Clontarf Swimming Club. The baths will remain open until the end of October before closing until next May.

Planning permission for the development, granted by An Bord Pleanála in 2012, stipulated the restaurant “shall be operated in conjunction with the swimming pool” and must remain “subsidiary to the main use of the site for swimming”.

The board had permitted a restaurant and bar area of 180sq m, but in addition Mr Cullen had built a part-glazed wooden pergola, with a retractable roof, on the terrace overlooking the pool without permission. The pergola added just over 100sq m of restaurant space to the development.

His company, Clontarf Baths and Assembly Rooms, sought permission from Dublin City Council last July to keep the pergola structure. However, the council has ordered its removal.

The restaurant “was originally presented as a supporting element of the overall proposal” and the “significant obstruction of the pavilion structure’s southern facade with the unilaterally designed pergola structure is a detraction from the originally design concept for the site”, the council said.

I think it’s important to note there is no public funding here, we are entirely privately funded

“It is also considered that the c.102sq m pergola structure significantly reduces the intended openness of the southern terrace area fronting the restaurant” and was “more akin to a conservatory”, it said.

Mr Cullen on Friday said he had not yet decided whether to appeal the council’s decision to An Bord Pleanála. If no appeal is lodged, the pergola must be removed within 12 weeks.

There had, Mr Cullen said “been a lot of misinformation in the last number of months” in relation to the baths. “I think it’s important to note there is no public funding here, we are entirely privately funded.”

However he said the baths were open to the public through the Clontarf Swimming Club and it was intended that a special membership would be available through the club, covering the use of the baths only, for next year’s bathing season.

“There weren’t any privately owned salt water swimming pools we could take as a blueprint for what we’ve done here, so we’re still figuring out how we can best make the pool available to the public.”

The Cullen family, whose business interests also include Seafield Hotel & Spa Resort in Co Wexford, and the Turk’s Head and Paramount Hotel, in Dublin’s Temple Bar, bought the derelict baths in 1997.

Initially they planned to redevelop the baths as part of an indoor pool complex, but were pipped to the post by the opening of a 50-metre pool at the nearby Westwood leisure centre in Fairview.

A number of applications were made between 2000 and 2004 to turn the baths into a restaurant, craft centre and art gallery, which would have involved the permanent closure and filling in of the pool, but these were refused permission.