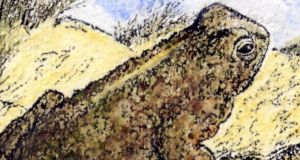 An official springtime road sign in Britain carries the burly silhouette of the common toad, Bufo bufo. It warns of a “migratory crossing” for the animal, though how one is meant to respond to the glint of a slowly shuffling procession, at night on a wet road, is not clear.

The NGO Froglife has mapped more than 700 crossing points where toads make the compulsive return to their breeding ponds. At peak migrations, teams of volunteers in high-vis jackets, with torches and buckets, lift the animals on their way.

Traffic-flattened toads are part of the major decline that has made them a “biodiversity priority” in the UK. Local authorities put up the signs, and earlier springs have brought national permission to start erecting them in January.

Ireland now has the alien common toad in two small and widely separated populations. The earliest on record was at Long Lough, Rathmullen, Co Donegal, in 2011, where long strings of spawn proved breeding.

In 2013, an Eye on Nature reader reported a common toad from near the Blue Light pub at Barnacullia in south Co Dublin. In 2014 came a reader’s photograph of another, in the Dublin mountains, and today’s Eye on Nature offers the latest, beside a granite wall at Stepaside.

These could all be roaming escapes from ventures in breeding for the pet trade, and their presence in Ireland has prompted ecological concern. A Toad in the Hole campaign, launched by the Herpetological Society of Ireland (thehsi.org), seeks news of sightings, with photographs, so that toads can be collected and “rehomed in captivity” for study of their impact on native amphibians and invertebrates.

This is welcomed by the National Parks and Wildlife Service (NPWS), concerned as it is about potential long-term competition from Bufo bufo with Ireland’s natterjack toad, Epdalea calamita. Rarest and most vulnerable of the island’s amphibians, this species survives somewhat precariously, mainly at the Kerry coast, with considerable investment in its care.

The common toad’s threat to the smaller, yellow-striped natterjack was considered in a 2014 “risk assessment” of Bufo bufo’s potential impact.

The toad is not usually considered an invasive species, and Donegal and south Dublin might seem safely remote from the natterjacks’ shallow ponds in the sand dunes and coastal fields of Kerry. Indeed, the two species belong to very different habitats. The common toad is happy in dense and shady vegetation, while the natterjack has a narrower niche in nature, liking open and sparsely vegetated ground.

However, the risk assessment proposed, the end of grazing or increased forestry would create terrain in which natterjacks find it harder to hunt food, become hyperactive and lose weight. The change “may allow [Bufo bufo] to enter and displace, reduce or eliminate the natterjack population”.

First spotted around Kerry’s Castlemaine Harbour in 1805, the natterjacks were long thought to have been dumped out in sand ballast by boats trading with Spain. DNA research, however, has shown their strong affinity with the natterjacks of northwest England.

In protecting and promoting them, the NPWS has been guided by the expert research of Britain’s Dr Trevor Beebee. He has estimated that their range in Kerry more than halved during the 20th century, a time of steady loss of Ireland’s farmland ponds.

The toads are now concentrated around Castlemaine Harbour and at the Maharees sand dunes of the north Dingle Peninsula, where many of their traditional, shallow breeding ponds are among the short turf of golf courses.

But more than 100 new ponds have been created around the Castlemaine shore since 2008, when the NPWS began a scheme for farmers. This has paid them grants to dig ponds, less than a metre deep and 15 metres across, keep them free of reeds by hand, manage grazing around them to keep the grass short, and care for any nearby dry stone walls in which the warmth-loving toads like to hibernate.

A decade later, reports the latest survey, 22 artificial ponds have been colonised by the toads, and last year only 13 produced the long egg strings of breeding. At many ponds, grazing had not been kept up and their margins are overgrown. For egg production and toadlet totals, the Maharees dunes remain the natterjacks’ modern stronghold.

Last year’s long summer drought brought home the special threat that climate change could bring. To beat the drought, netfuls of natterjack toad tadpoles were collected from shrinking ponds around Inch and Boolteens, reared in the Dingle Oceanworld aquarium, and returned as some 1,600 toadlets the size of a human thumbnail.

This rescue operation followed many recent “translocations” of tadpoles, of 10 from one pond to another, with varying success. But the new role of Oceanworld, together with Fota Wildlife Park, seems likely to be a regular part of conserving the natterjacks, whose breeding and survival is so much at the mercy of erratic rainfall.