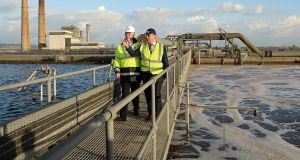 Irish Water is carrying out essential cleaning works at the Ringsend Wastewater Treatment Plant in Dublin over the coming days ‘to deal with current odour issues’ and to reduce risk of odours arising over the summer months. File photograph: Cyril Byrne/The Irish Times.

Irish Water is carrying out essential cleaning works at the Ringsend Wastewater Treatment Plant in Dublin over the coming days “to deal with current odour issues” and to reduce risk of odours arising over the summer months.

The plant, which treats about 40 per cent of Ireland’s sewage, is operating above capacity with problems exacerbated during periods of high rainfall.

The EPA confirmed on Tuesday that “waste water discharged back into the environment from this overloaded plant is breaching, and will continue to breach, the quality standards until upgrade works are complete” and that it is investigating recent discharges from the facility.

The immediate works involve cleaning storm water holding tanks, which currently contain a large amount of debris following heavy rainfall last month. The debris from the tanks will be moved into the treatment plant, where it will be treated as normal before effluent is discharged into Dublin Bay at Poolbeg. The tanks will also be washed down manually.

“The works will start immediately and will take approximately one week. Irish Water would like to apologise for any odours that arise while the work is being carried out,” said its regional operations lead John O’Donoghue.

“Due to the warm weather, it is essential that we act quickly to clean out the tanks to deal with current odour issues and to reduce the risk of odours over the summer months, from the debris left after the recent rainfall events.”

Irish Water informed the EPA on Tuesday about a brown-coloured plume seen discharging from the plant. The utility reported no unusual occurrence or breakdown at the plant.

The recent wet weather also led to the discharge of partially treated water from the plant into Dublin Bay and resulted in bathing bans being put in place.

Meanwhile, Inland Fisheries Ireland (IFI) said a significant fish kill had occurred on the Royal Canal in Kilcock, Co Kildare. An investigation is ongoing and has identified an agricultural discharge into a tributary of the River Ryewater which enters the canal at Kilcock.

Approximately 300 fish have been killed in the incident including roach, rudd, bream and pike.

“Work is now ongoing to ensure that there is no further polluting discharge to the system from this location,” said a spokeswoman for IFI, which also appealed to farmers to remain vigilant to avoid water pollution when harvesting silage and spreading slurry.