‘No rain on the horizon’ and hot weather due to continue into next week, says forecaster 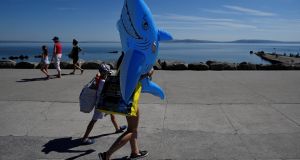 Temperatures are on track to hit record highs in the coming days with heat levels expected to reach at least 32 degrees.

Temperatures soared on Wednesday afternoon, hitting 30.8 degrees by 4.30pm at Shannon Airport. These highs are expected to continue on Thursday with temperatures as high as 32 degrees in parts of the country.

Meteorologist Joanna Donnelly said she expected the hot weather to peak at 32 degrees but it was possible the heat could continue to rise above that figure.

The highest temperature ever recorded in Ireland was 33.3 degrees, at Kilkenny Castle, on 26th June 1887.

During the summer of 1995, when Ireland basked in six weeks of unbroken sunshine, the peak temperature was recorded as 31.1 in Athy, Co Kildare.

The high temperatures are expected to continue through the week, dropping slightly over the weekend and into next week. However, for now it looks like the sunny skies and warm weather are here to stay.

“There’s no rain on the horizon,” said Ms Donnelly. “We’ve got these high, high temperatures until Friday and it’s still going to be warm through the week. There’s more uncertainty in the forecast beyond then.”

Forecasters should be able to predict whether temperatures over the coming days will hit record levels by Wednesday evening, she added.

Oak Park weather station in Co Carlow recorded 28.7 degrees, according to Met Éireann readings from at 4pm on Tuesday.

Readings from Dublin at the same time were lower than most of the country, with temperatures of 24.5 degrees at Phoenix Park, and 23 degrees at Dublin Airport.

The weather on Wednesday will continue the long, dry spell of sunshine seen since the weekend. Maximum afternoon temperatures will range from 26 to 30 degrees.

It will be slightly cooler along coastal areas, due to onshore breezes, particularly on the east and south coasts. Temperatures in these areas will be closer to the low 20s, the national forecaster has said.

Met Éireann’s national forecast for Wednesday night predicts temperatures of between 10 and 13 degrees, with fog patches across parts of the country in the very early hours of the morning. Overall temperatures for Thursday look set to be between 26 and 30 degrees.

Ice cream brand HB said they expect to sell up to 2 million ice creams over the course of the week, due to the fine weather.

In a statement, the firm said an estimated 11 HB brand ice creams were being bought per second, with Iceberger the most popular brand during the hot weather, followed by Brunch ice cream.

The Northern Ireland Fire and Rescue Service have warned the public over the increased risk of gorse fires, due to high temperatures and dry conditions.

Mark Smyth of the wildfire unit said the weather was creating a “tinderbox” for gorse fires. Many gorse fires are started intentionally, but Mr Smyth warned the public of increased risks of accidental fires.

“Gorse fires can also be caused accidentally by something as simple as throwing a cigarette from a car window, leaving a glass bottle on the ground, or not extinguishing a barbecue properly,” he said.

Due to the fine weather, the pollen count is likely to significantly increase, which will affect those with hay fever.

This included keeping windows closed when driving, to apply a small amount of Vaseline inside the nose to trap pollen, wearing wraparound sunglasses, and avoid cutting the grass or working in the garden.

Water restrictions may be likely in the coming days as Irish Water are reaching “critical high” water usage in the greater Dublin area, during the heatwave.

This is compared to a high point in water usage of 565 million litres a day during the summer last year. If the wider Dublin population does not take steps to conserve water and reduce usage, restrictions will be put in place, the utility has warned.

In the last 24 hours water usage in the wider Dublin area dropped from 609 million litres a day to 603 million, Irish Water said on Wednesday.

The dip, following calls to the public to conserve water shows “every small measure has a positive impact,” according to Kate Gannon, corporate affairs manager at Irish Water.

“We have a long way to go. If the drought is prolonged, water restrictions would become unavoidable if demand does not continue to drop,” she said.

“The situation remains critical and we are continuing to seek the public’s help. Every effort the public make to conserve water will help to minimise risk of supply loss to them and their community,” she said.

Dublin Bus has committed to only wash their fleet of buses every three days, instead of once a day, in an effort to save water.

Parts of Athlone, Kilkenny, Longford and north Dublin have experienced water restrictions and some outages, and areas in Donegal, Galway, Limerick and Mullingar are also at risk of shortages.

The Irish Greyhound Board has suspended all racing trials between the hours of 10am and 7.30pm , due to the heat. A spokesman for the board said the conditions on tracks are being monitored, ahead of all race meetings.

On Monday greyhound races at Longford were cancelled, but racing at Enniscorthy, Co Wexford and Youghal, Co Cork went ahead as planned, the spokesman said.