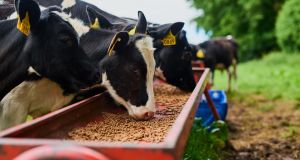 Some farmers are supplementing grass with five kilos of meal. Photograph: iStock

Farmers are facing “huge additional costs” if the current spell of dry weather continues as growth rates on farms have dropped by anything from 50-70 per cent, the Irish Farmers’ Association (IFA) says.

Temperatures on Monday reached 28 degrees, as Met Éireann warned the high temperatures are expected to steadily increase during the week and reach 30 degrees.

“The biggest effect that’s having is that farmers are feeding out some of their first cut silage,” said IFA president Joe Healy.

“That’s not a problem at the moment but it will be later in the year in relation to fodder. It’s way too early to be feeding that out now.

“Another issue is animal access to water. Cattle in general would drink anything from 30-70 litres a day depending in age and weight. So it’s very important they have access to an adequate amount of water.

“If this lasted for another fortnight, farmers would be under pressure. It might be worthwhile to sell animals rather than buying extra fodder. It’s not an emergency yet but it’s something we need to watch out for.”

Mr Healy said farmers were facing “huge additional costs” due to the lack of grass. “I’m a dairy farmer myself,” he said. “We’d normally be getting away with maybe one kilo of meal for one cow per day at the moment, and that would be just to get enough calcium and magnesium into them. We’ve increased that to just over three kilos.

“Grass is by far the cheapest form of feed, but when you have to supplement it with meal and concentrates, that’s expensive. Some farmers are supplementing with five kilos of meal. You’re talking about increasing the cost per kilo of three to four times. That’s the difference between the cost of grass growing in the field and buying meal.”

Irish Creamery Milk Suppliers Association president Pat McCormack said grass growing has “almost stopped” due to the lack of rain. “The farmers will be feeding additional concentrates and silage at this stage,” he said.

“It’s down to the drought conditions. Irish Water has been rationing water in Co Kilkenny by cutting it off at night. Now, the difficulty for farmers is that dairy cows will drink about 120 litres of water a day. It’s essential to the animal’s health and welfare that it gets water.

“The increased costs come from the use of silage and additional concentrates. There’s also a milk production loss. Cows won’t milk as well in these conditions. If there’s a shortage of grass, milk production comes down.”

Ireland-Italy rugby match due to be called off over coronavirus risk 19:06
Watchdog ‘disappointed’ with review of State’s lobbying Act 19:05
Could Ireland put towns under lockdown if coronavirus arrived? 19:00
EU issues ultimatum to London ahead of Brexit talks 18:54
Masks and hand gel sell out as coronavirus fears take hold 18:26