Luas closure would have lasted 2½ years 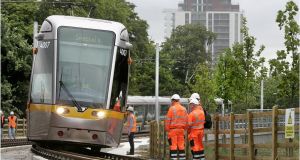 Following opposition to potential lengthy closures to the Luas Green line during the metro construction, the National Transport Authority last month announced it would shelve the southside section of the line. Photograph: Dara Mac Dónaill

Parts of the Luas Green line would have been closed for 2½ years if the National Transport Authority (NTA) had gone ahead with its plans for the complete Metrolink line.

In March of last year, plans were published for the €3 billion rail line which would run from Swords to Sandyford, serving Dublin Airport and the city centre.

However, following strenuous opposition to potential lengthy closures to the Green line during the metro construction, the NTA last month announced it would shelve the southside section of the line.

Minister for Transport Shane Ross had said the proposals for Metrolink, “which would result in the closure of the Green line for up to four years”, would be “unacceptable”.

However, a newly-published engineering report commissioned by the NTA shows that this four-year time frame applies to the cumulative total closures on the line during the period of construction.

During the last nine months of this 2½-year period, the closure would be extended from Ranelagh to Cowper, the stop after Beechwood on the line.

The report, by London Bridge Associates Ltd, found that all the stoppages needed for the Green line “tie in” to the metro line, would cumulatively add up to 47 months, just under four years.

However, it said the full closure of the Luas for this duration would not be required as the works could be “staged within a local zone, or blockade, breaking the service locally and affecting two or three stations”.

The main reason for the lengthy closure at Beechwood was the decision to continue tunnelling past Charlemont, and the construction of a tunnel “portal” where the line would emerge to the surface near the Beechwood stop.

The NTA last month announced the metro would run from Swords to Charlemont, and that the rest of the line to Sandyford could be developed at “an appropriate point in the future” but would not be required “for some time – perhaps 20 years or so”.

The engineering report said extension of the line to Sandyford at a later date could be done with cumulative closures of the Luas line of two years and nine months.

This 14-week saving could be achieved because the tunnel boring machine would be left in the ground from the first phase, the entire works phase would be shorter and the commissioning and running of trials would take less time, the report said.