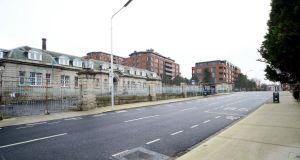 Photomontage of part of the apartment scheme planned beside the former Smurfit printworks at Daneswell, Botanic Road, Dublin

A complex of almost 300 apartments including a nine-storey block has been proposed for a residential development already under construction close to the National Botanic Gardens in Glasnevin, Dublin.

Developer Kieran Gannon’s Scanron is in the process of building an estate of luxury houses called Daneswell, costing up to €1.25 million, on the site of the former Smurfit printworks on Botanic Road.

However, with 35 houses already built, the company wants to drop its existing planning permission and is seeking “fast-track” permission from An Bord Pleanála for 299 apartments next to the houses.

Permission was previously refused for six-storey apartment blocks on the site, but the new application follows the removal last December by Minister for Housing Eoghan Murphy of the cap on building heights in the city. If the nine- floor block is approved it would be one storey taller than the nearby Phibsborough shopping centre tower.

The existing planning permission for the site, which remains live, was granted in 2016, before the introduction of the fast-track scheme that allows applications for more than 100 homes, or blocks of 200 student bed spaces, to be made directly to An Bord Pleanála.

The 2016 permission allows 43 houses and 76 apartments in blocks up to four storeys tall. Permission for a larger scheme of 147 homes including 66 houses, 14 duplexes, and 67 apartments up to six storeys tall was refused in 2014 on the grounds of its excessive height. The new proposal would almost triple the number of homes permitted from 119 to 334.

Dublin city councillors have described the application to change the development as “monstrous” and “greedy”.

Independent councillor Cieran Perry said the change was not a move to provide more homes, but was in fact delaying the provision of homes.

“This is a prime example of Minister for Housing Eoghan Murphy’s interference in the planning legislation and system, causing a delay in actually building of homes for people. There was planning permission on the site for a significant amount of units now we’re back to square one because of the Minister interfering and facilitating developers’ greed.”

Labour councillor Áine Clancy said while there was clearly a need for housing in the area, the size and scale of the proposal would be overbearing on both the houses under construction in the scheme and existing homes on Iona Road and other surrounding roads.

“I believe the heights previously approved for the site should be the maximum in this particular location.”

People Before Profit councillor Andrew Keegan said a development of 299 apartments, all but nine of which are one- or two-beds, was designed for a “vulture-fund” sell-off. “This will be bought up by a vulture fund and the whole development will be for rent, that’s why they have all the one beds.”

Sinn Féin’s Séamas McGrattan said the proposal sets “a dangerous precedent in other areas of the city”.

The application states the site is “sufficiently large to accommodate a well-designed higher-density residential development without giving rise to any adverse impacts on existing residential amenities”. The proposal to increase heights would deliver more homes and was in keeping with national policies, it said.

The council has until the end of this month to make a submission on the plans to An bord Pleanála.