How to nurture a sense of wonder in the natural world

One Change: The conservationist Rachel Carson believed it was crucial to encourage a child’s instinctive appreciation for the environment 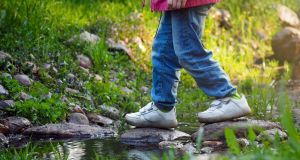 Carson believed “the war was won in childhood”; that if an early relationship with nature was established, a child would be more likely to grow up with a strong sense of care for the environment. Photograph: iStock

On a stormy autumn night, sometime in the early 1950s, the conservationist Rachel Carson took her 20-month-old grandnephew to the seafront. She wrapped him in a blanket and together they watched the thundering waves, as the wind raced around them. “I think we felt the same spine-tingling response to the vast roaring ocean and the wild night around us,” she wrote afterwards.

Known as the “patron saint of the environmental movement”, Carson was passionate about nurturing an appreciation of nature from an early age. While a sense of wonder about the natural world comes instinctively to children, it must be encouraged and protected, she believed.

Carson is best-known for Silent Spring, an explosive study on the impact of pesticide use which was published in 1962 and led to policy change in the US. Before that, however, she wrote an essay called Help Your Child to Wonder, what she considered her life’s most important work.

The central theme of this beautiful essay – published in book form posthumously and with stunning photographs by Nick Kelsh – is how to preserve our sense of wonder and awe in the natural world.

These days, when so much of the discussion surrounding climate change is frightening and pessimistic, there is a comfort in returning to Carson’s words. She believed “the war was won in childhood”; that if an early relationship with nature was established, a child would be more likely to grow up with a strong sense of care for the environment.

Carson hoped to encourage children and adults to experience the sensory and emotional in nature. She stressed the importance of listening as well as looking, and urged adults to “abandon the impulse to teach or explain”. While it’s great to discover more about different types of trees or birds, her thesis weighed upon the importance of observing nature freely.

And if you can’t get to a garden or to the sea, Carson’s advice is simple: “You can still look up at the sky – its dawn and twilight beauties, its moving clouds, its stars by night.” She also encourages going outside when the weather hasn’t been great, and to become appreciative of the “magic change”, for example, brought by rain in a forest. And as we face into the winter months and its shorter evenings, there’s lots to discover about nature at night-time. My six-year-old daughter regularly reminds me that our walk on the beach in the dark was the best part of her summer holidays.