Dublin’s water: where does it come from and how secure is your supply? 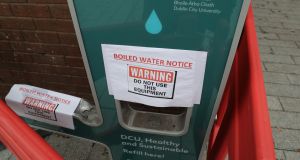 Boil-water notice in DCU, due to the failure at Leixlip water-treatment plant. Photograph: Nick Bradshaw

Srowland, a couple of kilometres north of Athy, Co Kildare, and Bog of the Ring, west of Balbriggan near the Dublin-Meath border, are two of the eight water-treatment plants serving the greater Dublin area.

While most people have probably never heard of them, those lucky enough to be served directly by these plants, unlike those on the Leixlip line, have not had to give a second thought to turbidity, cryptosporidium or shortages of bottled water in supermarkets.

Dublin and its surrounding commuter counties are also served by Ballyboden, near Rathfarnham; Vartry, in Roundwood, Co Wicklow; Monasterevin and Rathangan in Kildare and Ballymore Eustace, which is in Kildare close to the Wicklow border.

Perhaps you always had an idea that your water came from Stillorgan or Poulaphouca? The Dublin water supply zone is a labyrinth of pipes, plants and reservoirs.

The biggest plant serving the Greater Dublin Area is Ballymore Eustace. It produces more than half of all Dublin’s water, 52.1 per cent to be precise. In 2013 there was national embarrassment when water cuts had to be introduced while a prestigious web summit was being held in the capital. In addition to showing the city up in front of 10,000 of the world’s tech elite, the plant caused 1.5 million residents of the Dublin region a week of restrictions, which saw them without water from 7pm to 8am daily.

Ballymore Eustace was at the time undergoing a €100 million investment to increase its capacity to produce water from 252 million litres a day to 310 million litres. The works have been completed and plant has since been doing its job, with no further restrictions implemented.

Vartry water treatment plant is 150 years old and still providing more than 11 per cent of the capital’s water. Before the 1860s most Dublin drinking water was sourced from the Royal and Grand canals. The river Vartry rising below the Sugar Loaf mountain was identified as the best potential source for the city. The Vartry supply scheme involved building two major reservoirs to the south of Roundwood in Co Wicklow, a water treatment plant, a 2.45-mile long tunnel under Callowhill and 40 miles of trunk water mains to deliver water to the city. The project was an amazing feat of engineering for its time. But little was ever done to upgrade it and for more than a decade there have been some problems with drinking water quality, in addition to the risk the Victorian tunnel might collapse.

Dublin City Council had hoped to have a new tunnel in place and upgrade works completed by 2013 at a cost of about €20 million. That didn’t happen, and in 2013 an algal bloom on the reservoir resulted in major supply restrictions.

After the lengthy delays, and an expansion in the project to include a new – rather than upgraded – plant that pushed the costs to about €130 million, work is under way. The new tunnel was completed last December, and construction has started on the plant, with completion due in 2021. Once finished the project will “secure the long-term future of the water supply for 200,000 people in Wicklow and south Dublin and ensure it meets all drinking water standards”, Irish Water said. However, until then it cannot guarantee customers served by this plant will be free from disruption.

As more 600,000 households and businesses in the greater Dublin area know, the Leixlip plant has also had its problems.

The situation at Leixlip used to be worse before a new plant opened in 2002 at a cost of €42.4 million, increasing production of water by 60 per cent. Leixlip is now the second-biggest supplier of the capital’s water, producing 29.2 per cent.

The problem is the old plant. Upgrade works are ongoing but not expected to be completed until late next year, and until then Irish Water cannot guarantee the same customers who have been hit by two boil-water notices in the past month won’t be hit again.

The five other plants combined account for less than 8 per cent of the water supplies. Srowland, the largest of these, was opened in October 2013 and supplies 3.4 per cent. The next largest, Ballyboden, which delivers 2.3 per cent, has recently had a major upgrade to its associated reservoir, securing its supplies. Rathangan and Bog of the Ring, which both supply 0.5 per cent, and Monasterevin, which supplies 0.3 per cent, are operating efficiently and no upgrades are required, Irish Water said.

So can the Irish Water customer conclude that if they are lucky enough to be served by water treated in Ballymore Eustace, they can sip away securely, while those on the Vartry line cannot yet be so confident?

Sadly not. Most people will be drinking a cocktail. The water treated in Vartry or Ballymore Eustace can end up mixing in the Stillorgan reservoir before it makes its way through the mains supply to homes and businesses. The Stillorgan reservoir also dates from the 1860s and is undergoing an €80 million upgrade to turn it from an open facility, which birds fly over and sometimes into, to a covered facility, but this work won’t be completed for another year.

Also, Irish Water changes the configuration of which plants serve which areas from time to time, so in north Dublin you may sometimes be served Bog of the Ring or Leixlip.