New levy on disposable coffee cups to be announced

Minister for Climate action to introduce a range of environmental charges 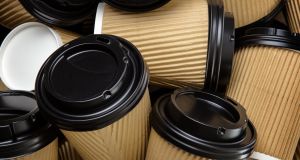 An estimated 22,000 disposable cups are used every hour. Photograph: iStock

A new levy of up to 25 cent on a disposable coffee cup is one of a number of environmental charges being announced by the Government.

Minister for Climate Action Richard Bruton will also say today that the existing plastic bag levy will increase by three cent to 25 cent.

The exact level of the coffee cup levy is yet to be finalised, and will depend on “market research”, but it is expected to be either 10 cent, 15 cent or 25 cent

It will apply to all single-use cups, including compostable cups.

Other charges in the first phase, set to be completed by the end of 2021, include a €5 per tonne waste recovery levy that would apply to landfill, waste and export and an increase in the landfill levy from €75 per tonne to €80 per tonne.

The second phase, completed by the end of 2023, will include levies on take-away containers. A third phase will see charges on retail food packaging, such as plastic used for baked goods, fruit and vegetables.

Coffee shops will also be asked to display a range of prices: the cost of a coffee in a reusable cup; the cost if a single-use cup is used; and the cost of having a coffee on the premises using the coffee shop’s own cups.

All money raised from such levies will be invested in environmental initiatives, such as programmes to tackle litter and waste.

Mr Bruton said “a coffee cup levy has clear benefits for the environment”, noting that 22,000 disposable cups are used every hour.