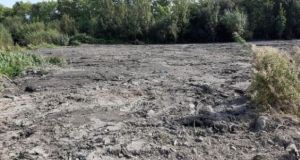 Thousands of creatures were killed during the destruction of an area of wetland in Tallaght in September.

A planned project to enhance an area of wetland in Tallaght which was destroyed following a miscommunication has been shelved for now, South Dublin County Council (SDCC) has said.

The area of Sean Walsh Memorial Park, known commonly as the Tallaght Wetlands, had been identified by Trinity College researcher Collie Ennis late in 2018 as being rich in animal and plant species.

The area was home to a diverse range of animals, including eels, newts and bats, according to researchers.

The area was destroyed during a planned cleaning and de-silting of one of the five ponds, resulting in the estimated deaths of thousands of creatures.

The damage sparked widespread condemnation after it was discovered in September 2019.

In May 2019, prior to the damage, South Dublin County Council sought funding from the National Parks and Wildlife Service (NPWS) for the Sean Walsh Memorial Park Wetland Enhancement Project, according to records released to The Irish Times under the Freedom of Information Act.

The project, for which the council sought €21,000 of the total €37,000 cost under the National Biodiversity Action Plan (NBAP), included the construction of a boardwalk, surveys of habitats and species in the area and training programmes for local community groups and schools.

It also proposed measures to encourage new species to the area, including the building of additional hedgerows and the construction of a more permanent shallow pond to increase the survival potential of tadpoles.

On June 19th*, the application for funding was withdrawn. In an email to the NPWS, county heritage officer Rosaleen Dwyer said a more extensive plan for a larger wetland area was being developed for the location and that the council would “hopefully reapply next year”.

Asked about the status of the project following the damage caused to the site, the council’s director of environment, water and climate change Teresa Walsh told The Irish Times: “The application made for funding to the NBAP for a project in this area has been withdrawn for now.”

Ms Walsh said a consultant ecologist has been appointed and an ecological assessment of the area had been conducted.

“The recommendations from the ecological assessment will be implemented in due course and in accordance with a timeframe as advised by the consultant ecologist.”

The removal of litter from material at the site has been completed. The next step in rehabilitating the habitat is an investigation to find out the depth of the water table and the nature of water-holding capacity on the site and adjacent to the site. That should be completed within the coming months, after which further surveys are planned.

The records show the levelling was the result of miscommunication between the council and the operator tasked with de-silting the pond. A private plant hire contractor had been engaged to operate the machinery.

In an email sent to councillors on October 17th, Ms Walsh said the soil excavated from the lake was supposed to be deposited in mounds at the site. Keeping the material on-site had proven to be beneficial in the past, she said.

“It was not the council’s intention to spread the excavated material,” she said. “Regrettably, there was miscommunication with the operator in relation to the mounding of the soil.”

“The soil excavated from the attenuation pond was extremely wet and when tipped on site it did not stay in upright mounds but instead it spread out to a large extent under its own weight. Sifting through the soil mounds led to it being further spread over a larger area than had been identified as acceptable.”

Asked if any changes had been made to procedures following the incident, Ms Walsh said a working group had been established to examine issues around the cleaning of lakes. “This will include an examination of the options to use the materials arising from such cleaning works on site, or alternatively to dispose of them off site.”

In the aftermath of the damage, members of the public and councillors reacted with anger and confusion. “I’ve tried to figure out in my head why this would happen but can’t figure it out as it’s a way from where the apartments are due to be built,” said Sinn Féin councillor Cathal King in an email to Ms Walsh on September 22nd.

Independent councillor Alan Edge asked for assurance that the council would “make every effort to put this right. Nothing less will do.”

One member of the public who wrote to the council said: “On a week where people took to the streets to demand a commitment to fighting climate change, this is unforgiveable.”

*This article was edited on November 28th, 2019. An earlier version of this article said the NBAP funding was withdrawn following the damage to the site.