Irish children strike a climate blow: ‘If we don’t do this, we won’t have a world’ 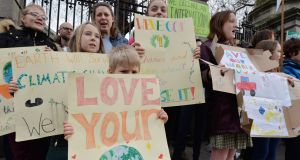 Rowan Kelly from Bray with other members of Climate Strike Fridays for Future, spending the 13th consecutive Friday protesting about Climate Change outside the Dáil. Photograph: Alan Betson / The Irish Times

It’s a global movement like no other; young people are skipping school on Fridays to protest about climate change, prompted by the example of Swedish teenager Greta Thunberg. It has been quietly taking root in Ireland and come March 15th many hundreds of school children are set to join the strike.

“Greta has sparked something that a lot of young people have been feeling for a long time,” observes Gold, who lectures in applied social studies at Maynooth University. They have become educated on climate change, unlike the older generation, she says. “They understand the facts and are prepared to make a stand.”

The strikes have drawn praise and criticism, notably from politicians. Prime minister Theresa May displayed shocking disconnect with tomorrow’s voters by allowing Downing Street to issue a statement saying the February 15th disruption caused by 15,000 young strikers was damaging for pupils. It “increases teachers’ workloads and wastes lesson time that teachers have carefully prepared for”, she said.

Belgium’s environment minister Joke Schauvliege was forced to resign after falsely claiming the country’s intelligence services held evidence children were directed by unnamed powers, and it was a “set-up”.

Ever since her lone protest started outside the Swedish parliament last August, Thunberg has dismissed such criticism with a “belongs in the museum” tweet, given climate breakdown is now facing the Earth.

For many people their action may seem bewildering, Gold accepts. “Why are they taking such extreme action? Are they being unduly politically influenced? Should we be concerned?”

She wrestled with the same questions until a rude awakening some years ago “on the urgency of climate change and what it means for our children. Like these children on the streets, I became anguished by the silence and the fear to face this mammoth challenge facing us all.”

Her conclusion was clear: “We are out of time. Not ‘nearly’ out of time – but actually out of time. Our planet is already warming fast, and the next generation will be in serious trouble”.

It led to Gold giving up a full-time job to focus on waking people up to this reality. “I wrote a book about my experiences, Climate Generation, with a wish that others could understand what the scientists are telling the world. I wanted to share my story with other parents – not as some kind of guilt trip, but as a sincere plea to wake up and take our kids’ future seriously.”

She started to look around and see where she could raise her voice for change. Last December a friend, Jim Scheer, introduced her via social media to Thunberg.

Many schoolchildren across Australia, and then the world, were starting to follow her example. “Then Greta made her speech to the UN climate talks in Poland. In one minute, she managed to capture the urgency of what the world is facing – and put a call out to everyone to raise their voices by coming out on Fridays.”

They decided to answer that call the following Friday outside the Dáil. They have convened there weekly at lunchtime ever since. “For me, with young boys, I felt it only right that I should stand on their behalf. After all, it is my own lifestyle, my inaction and my generation that has caused this mess. Sure, my boys will join when they can, but why should they stand in the cold, miss school and shoulder such a heavy burden? When they can’t, I will.”

Numbers attending the #FridaysForFuture strike have grown. “It is a wonderful eclectic mix of humanity. We greet each other in a spirit of inter-generational embrace. We realise that we need each other, that we are all the climate generation now.”

Similar actions have been taking place in Cork and Maynooth. Strikers and their supporters post on social media and log it on a fridaysforfuture.org map.

Jim Scheer believes the movement is snowballing. He is supporting strikers as “a dad with two children” and an advocate for climate action. The adults’ role was merely to plant a few seeds, he emphasises.

More significantly, “bottom-up, pester power” is taking root. “I think they are holding a mirror up to us and saying, ‘come on, get real’ [on climate action],” he adds.

Their 13th Friday gathering on February 22nd was attended by more than 100 people – in spite of it being half term – with Jane Mellett leading chants of “listen Leo listen...”

Mellett ’s activism, which saw her embark on a 1,000km pilgrimage from Assisi to Katowice in advance of the climate talks, is motivated by Pope Francis’s encyclical Laudata Si.

Thunberg has undoubtedly been the rallying call. “She’s a bit of a prophet. She’s is speaking to the heart of it.”

Mellett believes young people are being confronted by the effects of climate change and notice the world is on an unsustainable path; so much so there is “an awakening”.

Young people have a deep sense of justice, Mellett believes. She points to posters raised aloft by a mix of teens and primary school pupils: “the world is sad”; “the world is a precious pearl” and “where have all the polar bears gone?”

“Adults are disconnected with nature. [Children] still have that connection that we have lost,” Mellett says.

Parent Louise Holden is at her first rally with her 12-year-old daughter Lucille, who most definitely is the climate leader in their household. “She doesn’t allow us use palm oil. We’re not allowed bring plastic into the house.”

Lucille is armed with her “we declare an international emergency” placard in one hand and a megaphone in the other. “Her uncle bought it for her because he recognised she was an activist in the making,” her mother explains.

A pupil of Guardian Angels National School in Blackrock, Co Dublin, she says she is taking a stance “because if we do not do this, we won’t have a world”.

Students are connecting with peers and teachers around the country “who are concerned about climate and building a schools’ climate action network”, says Colm O’Connor, principal of Cork Educate Together Secondary School (CETSS).

“Young people in secondary schools don’t have a vote, but will be more affected by climate change than those in power. What we do in the next 12 years will affect them for the rest of their lives.”

The easiest thing for teachers would be to say to students, “this is going to happen”, he stresses. An authentic, organic engagement has to be allowed happen, which is inevitably a slower process, but it allows students “to get to know each other and to come up with a common platform”.

O’Connor expects the strike to be huge. Latest estimates suggest more than 60 secondary schools will be participating, with many adults supporting students.

Three teacher groups are facilitating action; each with up 70 people in regular email or skype contact. Some plan to strike at the school gates, especially those at primary level, others outside the Dáil and local government buildings.

Noel Cunningham, a science teacher at The King’s Hospital School in Co Dublin, outlines teachers’ role. “If a number of schools get involved then we can facilitate the students organising as much as possible themselves by working with each other... As teachers and parents we owe it to young people to help them get more involved. After all, it’s their future that’s being messed with.”

Saoi O’Connor (16) from Skibbereen Community College has led weekly protests outside Cork City Hall since early January. In response to those who accused her of mitching off school, she tweeted: “City hall is a two-hour bus ride from my house, I get up three hours earlier than I usually would for school to get into the city for 9am. I sit outside City Hall for 7hrs, sometimes with others, sometimes alone.”

O’Connor envisages, given the scale of climate action needed, she will be protesting every Friday for the foreseeable future.

Thunberg is deeply appreciative of such solidarity. “There has been a number of real heroes on school strike, for instance in Scotland and Ireland, for some time now...and the ones in Cork with the epic sign saying ‘the emperor is naked’,” she told the Guardian.

Environmentalist Bill McKibben has hailed Thunberg’s role, which is widely regarded as helping to defuse pessimism around climate change. “The movement that Greta launched is one of the most hopeful things in my 30 years of working on the climate question.”

Lorna Gold is often asked “why don’t you bring Greta Thunberg to Ireland?”

She responds by saying there is no need as people are already filling her shoes. “And it’s not true that nobody cares. There are a huge number of adults prepared to step up...We have to demonstrate we have skin in the game and be behind them.”

Ireland is not at a point where there is sufficient pressure on politicians to up their game on climate, she adds. And yet, they are about to be confronted by a unique form of large-scale strike.

“What we are seeing in Europe, and now in Ireland, are sustained protests.”