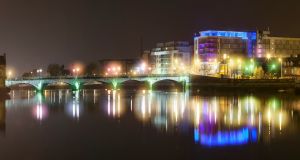 Limerick is taking part in a pilot project alongside Trondheim in Norway to help define how urban areas in the EU become positive energy cities. Photograph: Getty Images

Limerick has been unveiled as one of two EU cities seeking to dramatically reduce the carbon footprint of urban areas by becoming “energy generators rather than energy consumers”.

The pilot project will lead to a transformation of a cluster of buildings in the city centre and extraction of wave energy from the river Shannon.

Launched by Minister for Communications, Climate Action and Environment Richard Bruton on Friday at the Georgian House, Pery Square in the city, the EU “+CityxChange programme” (Positive City Exchange) sees Limerick chosen alongside Trondheim in Norway to roll out a project to revolutionise how energy is produced and used in cities and towns.

The programme is funded by the EU Horizon 2020 research and innovation programme and led by the Norwegian University of Science and Technology.

Limerick’s selection means the “Georgian neighbourhood” in the heart of the city will become a test bed for data collection and a range of new technologies to transform it into a positive energy city centre, creating more electricity than it uses.

“This is a very proud day as we embark on another new and great Limerick journey, and possibly among our greatest,” said Limerick city and county deputy mayor Cllr Adam Teskey. “Today we officially begin a programme in our stunning Georgian core that, together with Trondheim in Norway, will help define how urban areas in the EU become positive energy cities.”

Project coordinator Dr Mihai Bilauca of Limerick City and County Council said: “Limerick will become the example on how to transition from the traditional energy market of large and few energy generators, especially those harmful to the environment, to the new model of many microgenerators of clean energy.”

It will start with a core of five buildings, anchored around the Gardens International building on Henry Street. The building, developed under the Limerick Twenty Thirty initiative, is built to the most demanding energy-efficiency standards.

Other buildings signed up for the programme are Limerick Chamber of Commerce and Rooney Auctioneers on O’Connell Street; Limerick’s General Post Office on Lower Cecil Street and Limerick Youth Services on Glentworth Street.

A key aspect of the programme will be data harvesting around energy usage and consumption. Simultaneously, a range of new solutions based on digital technologies and digital platforms will be put in place “to enable a cluster of buildings to become a net energy producer and not just a consumer”.

The +CityxChange will also adapt local innovations, most significantly the deployment of a tidal turbine developed by Limerick company Gkinetic. This will be placed in the river Shannon, generating electricity for the positive energy zone nearby.

Ardnacrusha power station on the outskirts of Limerick was a global exemplar 100 years ago, generating enough green electricity for the entire nation, Dr Bilauca noted. The city was about to fulfil a new pioneering role by “becoming a European lighthouse ‘smart city’ – a model for other European cities to follow”.

“A clean energy future can only be created by people and the wider local community and today we ask everyone in Limerick to take part in the fight against climate change. Everyone can become part of this clean energy future, a future that Limerick is just about to help Europe define,” he added.

Earlier this year, Limerick was awarded the European Green Leaf for 2020, which recognises cities and towns committed to better environmental outcomes, including green growth and sustainable jobs.