Calls to continue suspension of hare coursing over deadly disease 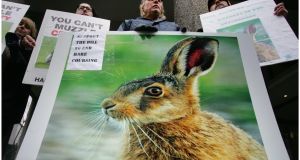 Anti-hare coursing campaigners believe the arrival of Rabbit haemorrhagic disease strengthens the case for a complete and permanent ban on the activity. Photograph: Bryan O’Brien

Animal welfare activist groups have urged the Government to maintain the suspension of coursing following a further outbreak of a deadly disease found in rabbits and hares.

Rabbit haemorrhagic disease (RHD), which is fatal to rabbits and hares but of no risk to humans, was confirmed in the wild in Ireland for the first time in July when cases were found in rabbits in Co Wicklow and Co Clare.

In August, a hare in Co Wexford was also found to be infected with the disease.

The Department of Culture, Heritage and the Gaeltacht confirmed this week that more rabbits have tested positive for the disease in Co Clare and Co Leitrim. It also said several wild rabbits and at least one hare were waiting to be examined.

The disease causes death within a few days of infection, with sick animals having swollen eyelids, partial paralysis and bleeding from the eyes and mouth. In the latter stages, animals exhibit unusual behaviour such as emerging from cover into the open and convulsing or fitting before dying.

The disease is highly contagious and can be spread directly between animals and in the faeces and urine of infected animals, as well as by insects and on human clothing. The incubation period may last several days and apparently uninfected animals may in fact be carriers.

As a means to control the spread of the virus, the department suspended the licences issued to the Irish Coursing Club to capture and tag hares for the 2019/20 hare-coursing season.

Anti-hare coursing campaigners believe the arrival of this disease strengthens the case for a complete and permanent ban on the activity.

John Fitzgerald of the Campaign for the Abolition of Cruel Sports said: “We are calling on Minister Josepha Madigan to maintain the ban on the capture of hares by coursing clubs. If this disease continues to spread, it could wipe out the entire population of the Irish hare and this would be an ecological catastrophe.”

Aideen Yourell, campaign director of the Irish Council Against Blood Sports said she was concerned that hare coursers may not report cases of infected hares, as it may affect their chances of having the hare-netting suspension lifted.

“We strongly contend that live hare coursing is totally incompatible with effective disease prevention and must now be considered a permanent risk to the well-being and future of our unique and much valued hare” she said.

Neil Reid, a conservation biologist at Queen’s University Belfast, said the virus has swept through Europe over the years but there is no evidence that the Irish hare population has declined.

“The disease was first found in domestic rabbits in Ireland in 2018 and this is a possible explanation as to how it spread to the wild rabbit and hare. It is highly contagious and can affect a wide variety of mammals. However there is no evidence of it being a threat to cows and there is absolutely zero threat to humans” he said.