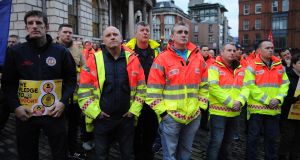 Dublin Fire Brigade is to stage two 24-hour work stoppages this month over plans to break up the fire brigade’s ambulance service.

The strikes are due to take place from 9am on Saturday, March 18th and Monday, March 27th.

Several hundred Dublin firefighters protested outside City Hall on Monday evening where they announced the strikes.

A December 2014 report from the Health Information and Quality Authority (Hiqa) recommended that a new central control centre for the city’s ambulance service be set up to address inefficiencies.

City council chief executive Owen Keegan two years ago announced the Dublin Fire Brigade ambulance service call-and-dispatch function would be transferred to the control of the HSE at the national control centre in Tallaght.

This would remove the handling of all ambulance calls for Dublin city and county from the fire brigade call-and-dispatch service in Tara Street.

However, following opposition to the plan from some city councillors and firefighters a consultative forum, involving the council management and union representatives was established in March 2015.

The forum commissioned an expert panel to make recommendations on governance, funding and call-taking and dispatch. The panel, chaired by Stephen Brady, a former Dublin chief fire officer, recommended the two call-and-dispatch services not amalgamate but rather an efficient technological system be put in place.

However council management did not accept the report and left the forum last January. According to the council’s minutes of that meeting assistant city manager Brendan Kenny said the forum had been set up to reach agreement on the proposal to centralise the call-taking and dispatching operation of the emergency ambulance service in Dublin and nothing further could be achieved by having any more meetings. The Siptu ballot followed this decision.

It would detrimentally affect the safe delivery of the fire-based emergency medical service (EMS) model and “fundamentally undermine the ability of the Dublin Fire Brigade to deliver the fire-based EMS model. It makes zero sense,” Mr Brady said.

Siptu organiser, Brendan O’Brien, said on Monday: “This dispute results from our members’ total commitment to providing the best emergency services possible to the residents of Dublin.

“These firefighters are withdrawing their labour to indicate, in the strongest manner open to them, their complete opposition to an attempt by senior management in Dublin City Council to break up the DFB Emergency Medical Service by removing its ambulance call and dispatch function.”

Mr Kenny, who was present at the meeting did not address the issue, nor did any member of council management.

The council later said it would not be providing a statement or a spokesperson on the matter.