We found a dead sperm whale. Is this species common around Ireland? Readers’ nature queries 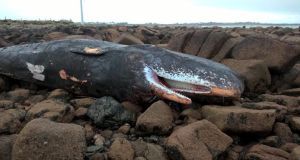 Eyes on nature: the sperm whale that Peter Grogan came across while walking around Carnsore Point, in Co Kerry 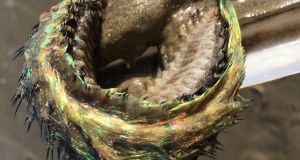 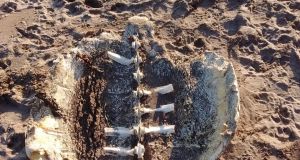 Eyes on nature: the decayed leatherback turtle that Clair Shannon’s husband found on the beach in Ventry, Co Kerry

While out walking around Carnsore Point we came across a whale carcass washed ashore at Nethertown. I think it’s a sperm whale. Are they common off Irish shores?
Peter Grogan
Palmerstown, Dublin

Sperm whales are widespread in the deep waters off the Irish Continental Shelf, in the Rockall Trough and along the slopes of the Porcupine Bank. There have been many stranding records.

After recent high tides a lot of sea life was washed up on Bettystown beach. I’m sending you a photograph of a creature I have never seen before.
Niamh Kelly
Bettystown, Co Meath

I encountered dozens of sea mice on Gormanston Strand. They ranged in length from 2in to 8in, or 5cm to 20cm.
Phil Reilly
Drogheda, Co Louth

The marine scale worm called a sea mouse, ‘Aphrodite aculeata’, lives in soft ground in shallow to deep water. Emily O’Byrne, from Batterstown, in Co Meath, also sent a photograph of a sea mouse, this one found on Portmarnock Strand, in north Co Dublin.

I came across a fungus near Lough Carra in Co Mayo that I’d like to identify.
Gary Purcell
Castlebar, Co Mayo

From the photograph you sent, it is one of the cup fungi. It would need closer scrutiny to decide which. It could be the orange-peel fungus, ‘Aleuria aurantia’, which has some reports in the biodiversity records in the midlands and is found at woodland edges.

My husband found the object in my photograph on the beach in Ventry following a recent high tide. It was about 4ft, or 1.2m, long, and the carapace was folded when we found it. Could it be a turtle?
Clair Shannon
Ventry, Co Kerry

It looks like a much-decayed young leatherback turtle. Turtles come north in the Atlantic as far as Ireland in summer, to the limit of an ocean temperature of 15 degrees, in search of the jellyfish on which they feed.