Is Galway worthy of its Green Leaf award?

It has been designated Europe’s most environmentally friendly small city, but campaigners say worrying developments are a threat to some of its most valued habitats 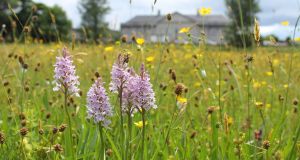 Imagine Galway using its status as European Capital of Culture for 2020 to build casinos and run poker marathons and mixed-martial-arts tournaments on Eyre Square. That’s how environmentalists feel about the city’s decision to accept this year’s European Green Leaf award while overseeing the loss of fragile habitats.

The Green Leaf award is something of a coup for Galway, which has become the first Irish city and one of only a handful in Europe to win it. As the European Commission explains, the award recognises the progress of smaller cities and towns “in their commitment to improving the quality of life for their citizens and exhibiting good environmental practice”.

Galway was competing against Cornellà de Llobregat, just outside Barcelona, in Spain, and Mikkeli, in Finland, both of which had been contenders previously. Applications were assessed on the basis of climate change and energy performance, mobility, biodiversity and land use, quality of air and the acoustic environment, waste management and circular economy, and water and wastewater management.

“This is a wonderful recognition of the effort being made across the city by a diverse and committed range of communities,” the city’s chief executive, Brendan McGrath, said when the mayor of Galway, Noel Larkin, collected the award last year, in Ljubljana, Slovenia, the 2016 European Green Capital.

Although they welcome the achievement, several community groups that have pioneered protection of the green corridors flourishing on both sides of the River Corrib believe the reality is somewhat different. If the city really were putting so much store on the environment, they argue, the community groups wouldn’t have to expend so much energy trying to save key habitats that have been earmarked for development.

One of the developments worrying environmental groups involves a €1.2 million project to replace the Kirwan roundabout. More than three years ago the city council was tasked with replacing six of the city’s roundabouts with traffic lights as part of a €6 million scheme – already facing cost overruns – agreed with the National Roads Authority (now Transport Infrastructure Ireland).

Back in the late 1990s Smith and colleagues enlisted hundreds of families to plant trees at Terryland on public land near Galway Shopping Centre. These have now matured.

Late last year Smith was told that “budgetary restrictions” meant that the park’s multisector steering committee, set up in 1999 under the auspices of the city council, and involving NUI Galway, Galway-Mayo Institute of Technology, An Taisce, the Health Service Executive, schools and communities, could no longer meet. It was no coincidence, he argues, that three of the city council’s six options for the replacement of the Kirwan roundabout would have a negative impact on Terryland park.

Smith says he has been assured that the steering committee will be reinstated, but there is still a sense of shock and betrayal among “hundreds of dedicated residents, including scientists, teachers and young people, who regularly give their time, energies and ideas to develop and maintain the local authority’s woods, parks and green spaces”.

Galway is in the latter stages of identifying a route for a controversial bypass, which has moved far closer to the city.

“If authorities can treat forests and parks as just reserve land banks, at a time when scientific research shows the importance of natural habitats to health and wellbeing, and when smart cities are opting for public over private transport, one wonders what sort of leadership we have,” Smith says.

On Galway’s eastern perimeter the Friends of Merlin Woods have also been battling to save one of the city’s oldest “green lungs”, which is home to red squirrels, 18 species of butterfly, five species of bat, the short-eared owl and a Burren-type limestone pavement.

The community group represents many nationalities living in new estates in the suburbs of Doughiska and Roscam, bordering the woodland around Merlin Park University Hospital. Ownership of the woodland is split between the HSE and Galway City Council.

“The meadows are quite beautiful, constantly changing colour throughout the summer months, moving from buttercups and cowslips to knapweed and orchid, attracting goldfinches, and rich in herbs,” Dan Clabby, of Conservation Volunteers, says.

Plans for a bus corridor through the wood were successfully opposed in 2014 in a campaign run by the Friends of Merlin Woods. But the group’s members had to object again when it emerged that the HSE had offered to sell part of the Merlin campus that includes fragile meadowlands to Galway Hospice.

Last summer councillors took the first steps towards materially altering the city development plan by voting to rezone lands in Merlin designated for recreational and amenity use. Galway City Council’s planning department opposed the rezoning, arguing that the location the hospice had earmarked for a 26-bed unit was not the best location.

“This site has high environmental and amenity value, significant biodiversity, characteristics of protected habitats, and high diversity of flora and fauna,” a senior planner, Helen Coleman, told the city council in December.

She proposed that the HSE, city council and hospice should work together to find a more appropriate location on existing community-facilities land at Merlin.

In the subsequent debate the mayor said that he didn’t know what all the fuss was about over a “couple of hundred acres of forest park” and that “it would be a shame if we couldn’t hand over seven acres to the people that are most ill in the community”.

“Although the size was decreased from 15 acres to seven acres , the original planned building work will stay the same and will destroy most of the annex-1 meadowlands,” she says, referring to the section of the European Union habitats directive that defines ecologically sensitive areas. These meadowlands are, she adds, “rich in many species of orchids – which grow in their hundreds, if not thousands – and an area of international environmental importance.

“The population in the communities surrounding Merlin Park and Woods is expected to expand from about 30,000 to 60,000 as development continues in this area over the next few years. Everyone needs a place to escape to, and in a city this is a rare thing. We would still hope that the HSE and Galway Hospice would recognise that, and find an alternative site within the hospital complex which will be more suitable for the needs of all.”

The chief executive of Galway Hospice, Mary Nash, says that the design phase will accommodate many of the concerns raised during the rezoning and that “not one tree would be touched”.

Stanley points out that the Merlin woodland is not the only habitat to have been targeted for development. Galway City Council says that a total of 20 hectares, or 50 acres, of land rezoned in material alterations to the new city plan include annex-1 habitats. “There is no way of mitigating the impact of development on wild areas which took generations to develop,” she says.