New furry prey for the windhover, by any other name 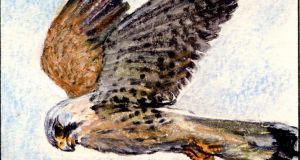 For raptors like kestrel (above) and barn owl, the influx of voles and greater white-toothed shrew offers a change of diet. Illustration: Michael Viney

Where the hill behind us curves round to face west, there’s a stretch where it steepens sharply and is littered with glacial rocks. Any breeze from the sea – which is usual – bounces up the slope to let a kestrel hover there with spread wings and least effort: perhaps it has a wind-map in its mind of these things.

“Windhover” is an old name for Falco tinnunculus (falco being the Latin for sickle, the shape of the wings, and tinnunculus for jingling, as of a bell and onomatopoeic for the kestrel’s rare cry). It is also a name I love, surviving the ecstatic densities of Gerard Manley Hopkins’s much-parsed poem.

Pursuing the word’s history online brought me to a lively row over two supposedly ancient alternatives in historic English usage: “windfucker” and “windsucker”. The first is advanced in an online dictionary compiled by an American sociologist and author Douglas Harper (Online Etymology Dictionary, 2001-2018). A criticism that the elongated “s” of old manuscripts has simply been misread has prompted vigorous and erudite exchanges (see Wiktionary: Talk: windfucker).

The current balance of the argument seems to be that both words have sound provenance, with the “f” word in use as synonym for “beat” or “strike” – something vigorous, anyway – in the 16th and 17th centuries, and the other as having local usage from Kent to Orkney.

Of much more interest scientifically has been a Finnish study in the 1990s, which showed the hovering kestrel’s ability to track voles on the ground below through ultraviolet (UV) reflections from the urine and faeces the rodents use to scent-mark their runways.

In northern Europe, and notably in Scandinavia, there are broadly four-year cycles of change that synchronise crashes in the vole population with kestrel migrations over hundreds of square kilometres. When this happens, how do the birds seek out the most promising concentrations of voles?

The Finnish researchers used captive kestrels in laboratory experiments to show that they detected vole scent marks in UV light but not in visible light. Then they moved out into field trials over some 100sq km of level farmland.

They divided this into areas with and without artificial vole trails of urine and faeces, and without trails at all, and distributed kestrel nesting boxes between them, 15 to each. They watched the foraging, mostly male birds for 24 mornings as they hunted near the boxes the following spring and charted their special attention to the areas with artificial scent trails.

Ireland had no voles until the bank vole, Myodes variolus, arrived in the 1920s with German earth-moving machinery brought in through Foynes to build the Shannon dam at Ardnacrusha. They now extend through nearly half the island, mostly in the south and west.

Another alien invader, the greater white-toothed shrew, was discovered in 2008, its little bones showing up in disgorged pellets of kestrels and barn owls in Tipperary and Limerick. The shrew is thought to have arrived en famille in the root ball of a big plant imported to an Irish garden centre; now, advancing at some 5km a year, it is colonising seven counties.

Ireland has been poor in small mammal species, but the two newcomers have threatened those we have, and notably the native field mouse and pygmy shrew. The latter is disappearing altogether where both aliens are present.

Such changes have brought what has been called “an invasional meltdown” to the ecosystems of hedgerow and grassland. And for raptors like kestrel and barn owl, it offers a change of diet.

Dr Pat Smiddy, an ornithologist and conservation ranger, decided to take some measure of change by analysing kestrel pellets across 650sq km of east Co Cork and west Co Waterford – farmland within the aliens’ known territory. From nest sites in old and ruined buildings, many of which he knew, he collected 1,057 of the pellets.

Teased apart for significant bones, every site yielded bits of bank voles, especially where the greater white-toothed shrew was also present. The pygmy shrew turned up mostly where the bigger shrew was absent and never where both aliens live together. Field and house mice and brown rat – traditional kestrel prey – were low in the percentage of remains.

This research into Irish kestrel diet, the most comprehensive so far, shows how important the alien mammals have become for birds of prey and the impact of their competition with native furry species. Our birds of prey are changing too, as red kite, golden and white-tailed eagles have been introduced as apex predators, so that a whole new wildlife scenario heads into the problems of climate change.

Dr Smiddy’s study is published in the Biology and Environment journal of the Royal Irish Academy.