Has your local beach made the list? 83 Irish beaches and seven marinas achieve the accolade 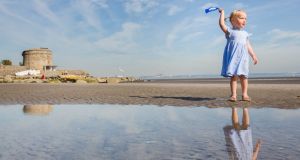 A record number of blue flags have been awarded to Irish beaches and marinas for 2018 by An Taisce environmental group.

The 83 Irish beaches and seven marinas that have achieved the accolade must adhere to specific criteria related to water quality, information provision, environmental education, safety and site management – and comply with bathing water regulations considerably above minimum EU standards.

The number of sites receiving the blue flag is up two on last year’s total.

Carne in Co Wexford has achieved Blue Flag Status for the first time ever this year, while Ardmore in Co Waterford has been awarded for the flag first time since 1997 following the completion of a new wastewater treatment plant in the area during 2016.

All beaches and marinas awarded in 2017 retained blue flag status for 2018. Killiney and Donabate beaches in Co Dublin lost their blue flags in 2017 and did not regain them in 2018 due to their current bathing water classification by the EPA.

A blue flag standard is an international award which recognises outstanding compliance with bathing water quality and sewage treatment regulations. The programme aims to raise environmental awareness and promote sound environmental management of beaches, marinas and inland bathing waters around the world.

“Today’s high number of awards reflects the great efforts made by local authorities, An Taisce, local coastal communities and other volunteers on the ground. It also reflects well on the work being done more widely within catchments to improve water quality,” according to Minister for Housing, Planning and Local Government Eoghan Murphy.

An Taisce coastal awards manager Ian Diamond said: “The Blue Flag is an award of excellence, the beaches and marinas that have achieved this accolade today have complied with strict criteria relating to water quality; safety, facilities for visitors, beach management, environmental education and the provision of information. It is privilege to be awarding a record number of sites with blue flags this year”.

Sherkin Island’s Silver Strand in Co Cork and Tranaun on Inishturk in Co Mayo have been awarded the Green Coast Award for the first time.

Mornington in Co Meath; Port Arthur in Co Donegal, Waterville Town Beach in Co Kerry and Kilfarrassey in Co Waterford lost their Green Coast Award for 2018 due to failure to meet stringent water quality standards required. An Taisce acknowledged, however, ongoing efforts of Clean Coasts volunteer groups and local authorities in the management of these sites.

Speaking at an awards ceremony at The Martello Hotel in Bray, Co Wicklow on Monday, Mr Murphy said: “Achieving these awards is quite rightly a point of fierce local pride but it really engages communities and citizens with their natural environment. [THE]Government is committed to supporting these programmes and to building on them to achieve positive changes in environmental behaviour.”

The Green Coast Awards scheme is notable for the involvement of Clean Coasts groups of which there are now more than 600, comprised of thousands of volunteers throughout the island. “Clean Coasts groups contribute significantly to the protection of Ireland’s coastal environment. Over the past year these groups removed over 750 tonnes of litter from our coastline,” Mr Diamond pointed out.

“Local Authorities, marina operators and local communities should be commended for their efforts in achieving Blue Flag and Green Coast award status today,” he added.

An Taisce operates the blue flag programme in Ireland on behalf of the Foundation of Environmental Education. The eco-label is awarded in 45 countries every year. The Green Coast Awards is supported by the Department of Housing, Planning and Local Government and by Fáilte Ireland.