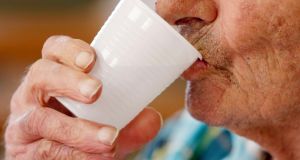 An Oireachtas committee is presssing ahead with plans to introduce a deposit scheme for drinks containers, despite reservations by Minister for Environment Denis Naughten. Photograph: Reuters

An attempt by Minister for Environment Denis Naughten to stall the introduction of a deposit scheme for drinks containers has been rejected by an Oireachtas committee.

Amid claims it could cost up to €116 million to set up a deposit and return scheme (DRS), Mr Naughten warned it would be “financially reckless” to proceed without proper scrutiny of the proposal.

However, members of the Committee rejected the Minister’s view, voting to press ahead with the plans drawn up by the Green party.

The decision was taken when the committee met in private session on Tuesday to sign off on its final report on the Green’s Bill, following hearings on proposed measures in recent months.

Green party leader Eamon Ryan said the amendment, if adopted, would have effectively killed the Bill. It envisages a 15 cent deposit on aluminium and plastic bottles and a mandatory DRS, which is vehemently opposed by Repak recycling company.

Whether it goes onto committee stage is now “in the Government’s court”, Mr Ryan said. Mr Naughten had the option of bringing amendments at that point, he added – or it could stop the Bill by way of issuing a “money order”.

There was a good economic rationale for a DRS, which was supported by Fianna Fáil, Sinn Féin and People Before Profit members on the committee, he said.

The Minister’s proposed amendment stated: “The Committee also recognises that a further Committee Stage amendment will be necessary to give the Minister the discretion to introduce a DRS Scheme rather than the current mandatory nature of the Bill. This will afford the Minister time to carry out the necessary research into a model that may be fit for purpose in Ireland and does not increase costs or have effects on the existing kerbside collection system.”

One evaluation submitted to the committee suggested a DRS could cost €116 million to set up. It is understood Mr Naughten told committee members household charges would also rise by up to €1 per lift for the green bin collection to recover an estimated 3 per cent of additional plastics.

Mr Ryan said a DRS might be introduced for closed drinks containers but would exempt glass bottles “as the current rate of recycling for both of these items is fairly high”.

He proposed changing the charging structure for plastic bottles and aluminium containers under current arrangements with Repak, from paying by tonne to paying by container. This would amount to a five-fold increase in what producers pay on plastic and aluminium but bring in on a par with other countries.

In response to the committee’s draft report Mr Naughten said the potential consequences of a DRS must be carefully considered: “Without a complete understanding of the cost implications on the taxpayer, on employers, on retailers and on customers it would be financially reckless of me to proceed with its introduction without proper scrutiny.”

Currently, €65 is paid to waste collectors for every tonne of household packaging waste collected by Repak; money they collect from producers who place packaging on the Irish market to do this.