Skylarks stunned me, just like the poets the bird has hoisted into verse

Another Life: Michael Viney on his awe for a key voice in ‘Dawn Chorus 2018’ 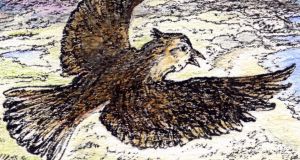 My first encounter with a singing skylark, a few decades ago, put me flat on my back on the moss of the dunes – a proper posture for awe.

The bird had sprung, as larks do, almost from under my feet and spiralled up to hang as a speck in the clear air, pouring out a ceaseless flow of whistlings and trillings that seemed to stun the whole hillside into listening. They certainly stunned me, just like the countless poets the skylark has hoisted into verse.

One could look to science (flight up to 100m, wings fluttering at 10 to 12 beats a second, sonagram with up-and-down pitch pattern between 2kHz and 5.5kHz over about six seconds, average song up to two or three minutes but can go on for six). Or could simply settle for Shelley: “Higher still and higher / From the earth thou springest . . . And singing still dost soar, and soaring ever singest.”

A lot more is assembled online by a sensitive American blogger, who didn’t, one gathers, vote for Trump. There are further from Cecil Day-Lewis (“Be strong your fervent soaring, your skyward air! / Tremble there, a nerve of song!”) and a typically ecstatic tongue-twister from Gerard Manley Hopkins (“Left hand, off land, I hear the lark ascend, / His rash-fresh re-winded new skeinèd score / In crisps of curl off wild winch whirl, and pour / And pelt music, till none’s to spill or spend”).

Despite such unease I shall be listening for the lark as dawn brightens tomorrow, quite probably from the comfort of my pillow

Ted Hughes, whose skylark may have soared in Connemara, is predictably darker: “The lark begins to go up / Like a warning / As if the globe were uneasy . . . / You stop to rest, far up, you teeter / Over the drop . . . / Then up and up and up / Like a mouse with drowning fur / Bobbing and bobbing at the well-wall”.

The globe is indeed uneasy, as one in eight of its bird species is threatened with extinction. As farming intensifies, Europe’s skylarks are down by almost half, and in Ireland by 30 per cent, since 1970.

It is no longer breeding in many parts of the south and east, its nesting retreating to the uplands and coastal margins and islands. On the grassy machair behind the dunes, below me, Michael Longley has pictured the spring tide “seeping after sun and moon / To pour cupfuls into the larks’ nests”.

Despite such unease I shall be listening for the lark as dawn brightens tomorrow, quite probably from the comfort of my pillow. It is one of the host of different birds that will be heard breaking into song across the planet. Between Ireland’s midnight and 7am their chorus will be broadcast on RTÉ Radio 1, as well as to listeners across Europe and Australia.

An English skylark researcher, Eric Simms, a sound recordist as well as ornithologist, began all this more than half a century ago. He organised the synchronised recording, in early June 1951, of the spread of the dawn chorus across the UK.

Skylarks anticipated the rise in light as it rolled across these islands from northeast to southwest. Their first song was recorded at 01.30 GMT in Scotland’s Cairngorms, 01.51 in Northumberland, 02.20 in Kent, 02.27 in Staffordshire, 02.28 in Co Antrim, 02.33 in Lancashire (a bit late in industrial haze) and 02.36 in south Wales.

At RTÉ Derek Mooney and his Mooney Goes Wild team of experts pioneered the broadcasting of the Irish dawn chorus some two decades ago, then extended live transmission across Europe through links with other presenters as far as Russia.

Tomorrow’s dawn chorus, on RTÉ Radio 1, will track the songs of myriad species, from the tropics to the tundra, in their first welcome to the day

In 2016 this triumphant capture of the exquisite avian sound, with human commentary in a murmur of national accents, won the programme the Rose d’Or award for the European radio event of the year. Tomorrow’s dawn chorus will track the songs of myriad species, from the tropics to the tundra, in their first welcome to the day.

For some of Ireland’s skylarks, meanwhile, there is promise of a better future. In the Bride Valley of east Cork – where, I’m told, the bird is “just hanging on in pockets here and there” – a five-year pilot project has been launched to reward tillage and dairy farmers for actions encouraging wildlife.

In the logo of the new Bride Project (“Farming with Nature”) a skylark is poised above bands of green and gold, denoting the grass and cornfields that comprise its ideal habitat. Farm management plans will offer the birds patches of ungrazed pasture to nest in, and unsprayed stubble fields for winter feed.

A Scottish skylark researcher, Diane Hendry, wrote an anxious poem about her job: “I worry that skylarks have been expelled, / become dissident birds. / I try to pretend they are simply out / of fashion, like Shelley / but secretly I am afraid / they have been hushed up”.

In Bride Valley, let’s hope, they’ll soon be back in full number, and “soaring ever singest”.