Over £270,000 in emergency funds approved by Derry City and Strabane District Council 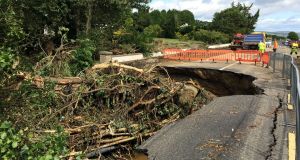 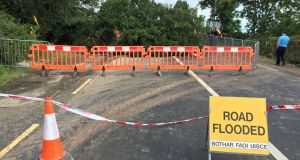 More than £270,000 (€290,000) in emergency funds has been approved to help people whose properties were damaged in the devastating floods in Derry on Tuesday.

So far 560 requests for assistance from flooded homeowners have been registered with Derry City and Strabane District Council.

The council allocates the emergency money on behalf of the North’s Department of Communities.

“Over 300 applications for the Emergency Payment Scheme have been assessed,” a council spokeswoman said. “Priority is being given to advancing the payments to those affected.”

Flooding help centres in the worst affected areas, in Eglinton and Drumahoe in Co Derry, will remain over the bank holiday weekend to provide advice on entitlements and insurance as well as access to emergency supplies of donated food, clothing and cleaning products.

An additional flooding help centre has been opened in Plumbridge in Co Tyrone.

The Red Cross are providing assistance through a mobile support unit, and NI Water and the Northern Ireland Housing Executive have offered to assist with the cleaning of homes and gardens.

Twenty-five roads which had been closed due to flooding have now been reopened, and all affected main traffic routes are now passable with care.

The A5 Derry to Strabane road - which had been closed since Tuesday - has now reopened with a temporary speed restriction at Burndennett.

The A5 Victoria Road, which was closed until Friday because of flooding, now reopened with a lowered speed limit in parts

With water levels reduced, the roads that remain closed are mainly due to collapsed bridges or culverts, landslides, damaged road surfaces or debris washed onto the road, the Department for Infrastructure said.

These roads are mainly in the Claudy and Drumahoe areas of Co Derry, and the Gortin and Greencastle areas of Co Tyrone.

“It is likely that some minor roads may be closed which the Department is unaware of at present as efforts have been focused on the main road network however all roads will be inspected in the coming days,” a department spokesperson said.

“It is also possible that some further roads may have to be closed following inspection in the interests of road safety.

“Work is continuing over the bank holiday weekend to assess and repair damage to the roads and rivers impacted by this flooding.

“Road users are reminded to adhere to road signs and any temporary traffic lights, to avoid roads affected by flooding if possible and to take care driving.”