Do Not Swim warnings for Loughshinny and Rush South beaches 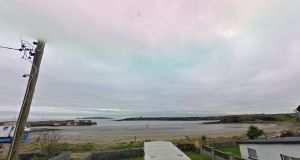 Notices against bathing have been issued for Loughshinny (above) and Rush South beaches in the wake of heavy rainfall in parts of the country. File photograph: Google Street View

Notices against bathing have been issued for Loughshinny and Rush South beaches in the wake of heavy rainfall in parts of the country.

Do Not Swim notices were issued on Thursday and are expected to remain for three days.

Routine samples taken at both beaches on August 21st found high levels of microbial contamination. A likely cause of deterioration in the water quality is sewage from waste water treatment plants or sewer networks.

Fingal County Council, which issued the notices, said investigations into the issue are ongoing. While the beaches remain open, beach users are asked to respect the temporary notices.

The HSE has advised that swimming at the beaches be prohibited until microbial levels return to normal.

Another sample at each beach was taken on Thursday and sent for testing, and results are due this coming weekend.

Peter Webster, senior scientist at the Environmental Protection Agency (EPA), said while notices are in place for almost “the entire West coast”, beaches in Donegal do not seem to be too badly affected by the rain.

He added it was surprising that Dublin Airport did not show “anywhere near the levels of rainfall that other parts of the country have experienced” this week.

The EPA needed to discuss with Fingal Council where the high levels of contamination had come from, he added.

Members of the public intending to enter the water at any beach in Ireland are advised to check the EPA website, beaches.ie, to ensure the water quality is satisfactory.