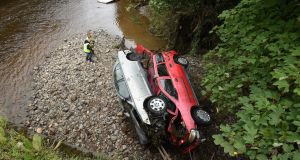 Two cars are towed from the River Faughan at Drumahoe after they were swept away by the flooding. Photograph: Trevor McBride

Homeowners in flood-hit areas of the north-west were warned on Thursday to be on the alert for further flooding after more rain was forecast.

The Department of Infrastructure (DoI) said Regional Community Resilience Groups and their roads and rivers teams had been advised of weather patterns, and were prepared to respond to any flooding that might occur.

“More than 8,000 sandbags have been distributed since Tuesday. Stocks are being replenished in sandbags stores in the north-west in preparation for any further possible flooding and these will be made available in locations where there is an imminent risk to life or risk of significant damage to property from flooding.”

Met Éireann has issued a status yellow rainfall warning valid from 6pm Thursday to 6pm Friday. Accumulated rainfall has the potential to reach 25 to 40mm.

A total of 465 householders have registered with Derry City and Strabane District Council as in need of the emergency payment scheme, which provides up to £1,000 for immediate repairs to make flood-hit homes habitable.

A spokesperson for the council said anyone who has not registered for the scheme, which covers residential properties only, should do so as soon as possible.

Hundreds of staff from the council, the Police Service of Northern Ireland, the NI Fire and Rescue Service and the DoI are on the ground in affected areas attempting to pump away excess water, reopen roads and clean out homes and businesses.

The worst-affected areas are Drumahoe just outside Derry, where the river Faughan burst its banks, and Eglinton in Co Derry. Residents have been gathering at flooding help centres in both villages for help and advice.

Local businesses and charities have been donating food, clothes and cleaning products, and a number of people have been housed in temporary accommodation.

More than 30 roads are still affected by flooding, or have been identified as damaged by the DoI.

Work is continuing to repair the main A5 Derry to Strabane road, which has been impassable since Tuesday, and the the DoI anticipates it will be open by Friday afternoon.

Grilles in the area have also been checked to ensure they are clear and free-flowing.

Several roads remain closed in Claudy in Co Derry after a bridge was washed away.

Road users have been asked to adhere to road signs and any temporary traffic lights, to avoid roads affected by flooding if possible and to take care driving.

Flights from City of Derry Airport – which had been closed since Tuesday because of flooding to the terminal and runway – resumed on Thursday afternoon.