‘There is light at the end of the tunnel’: Ballinasloe man recalls devastation in 2009

Members of the Defence Forces, 28th Infantry Battalion, based at Finner Camp in Donegal, have been deployed to help residents of the Inishowen peninsula clear debris following the recent floods. Video: Peter Murtagh 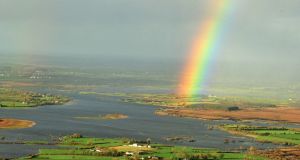 Flooding in the north-west of the country this week has brought back “painful memories” for previous flood victims who had their homes destroyed by flood waters in the past.

Willie Devlin (70), from Ashfield Drive in Ballinasloe, Co Galway, remembers the devastation the 2009 floods caused to him and his neighbours.

Mr Devlin was one of a number of residents in the area whose homes were flooded when the river Shannon burst its banks in late 2009. Heavy rainfall caused excess flood water to spill over into the River Suck in Ballinasloe from the Shannon.

“We went through the mill in 2009 when the heavy flooding hit us. The River Suck runs along the back of our houses on Ashfield Drive. When the Shannon burst the banks it caused us a lot of damage as there was an overspill of water,” Mr Devlin told The Irish Times.

“About €35,000 worth of damage was caused to my home at the time and it really was awful so you can feel for the people in Donegal. We know exactly what they are going through.”

The flooding in 2009 caused over €8 million worth of damage to homes and businesses in the Ballinasloe area, which were left under water for several weeks.

Mr Devlin recalls the rain beginning in November of that year and it continuing into the second half of December. The floods proved disastrous for Ballinasloe as many businesses were forced to close up for weeks on end.

“I remember walking out into my back garden into three foot of water. Inside the house there was at least 12 inches of water on the ground level of my two-story house. It took a good few months to get the insurance settlement. You have to keep the pressure on,” he said.

“The tiles all had to come up, walls stripped and doors replaced. It was a horror story and caused about €37,000 worth of damage. All the carpets and wooden floors had to come up too.”

While Mr Devlin and his wife Maureen were eventually compensated by their insurance company, they said it was a “long-winded” process between all the forms and inspections.

“It took us a good few months to get our claim sorted but it did happen. You have to keep the pressure on to get your home back in order. To prevent flooding the town came together to have a flood prevention wall built,” said Mr Devlin.

The project, which was given more than €1 million in Government funding, consisted of a flood defence barrier which is approximately 1.4 km long and now protects more than 100 households in the Ballinasloe area.

The project involved the construction of a reinforced concrete flood defence wall consisting of the installation of steel sheet piles using welded joints and a 600m reinforced concrete pile cap, which runs along the river at the back of the houses on Ashfield Drive.

Since the construction of the wall taking place, Mr Devlin says that the community has not taken a single drop of water.

“I would certainly encourage any community that is prone to flooding to come look at our flood wall. It has been a life saver,” he said.

“The devastation that happened in Donegal this week is dreadful and your heart would go out to the families. We have been there but they will get their homes back together. It’s the initial shock to see your furniture and home sitting in water that’s the hardest to get over.”

Mr Devlin says there is “light at the end of the tunnel” for flood victims – it just takes a lot of patience and perseverance to put a home back together.