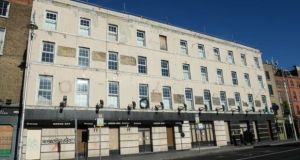 Monteco Holdings was given permission to demolish the Ormond Hotel and redevelop a new hotel on the site.

Several of the largest international property investment firms currently operating in the State are among more than 50 private companies entered on Dublin City Council’s register of vacant sites.

Property developers make up the majority of the owners of 70 sites worth more than €220 million which could accommodate thousands of homes, but have been left vacant and derelict, sometimes for decades.

Sites on the register, established to crack down on landhoarding in the city, will be subject to a 3 per cent levy on their value, which will be payable annually from 2019.

Targeted Investment Opportunities, a consortium headed by US investment group Oaktree, which has been prominent in buying up distressed properties in the city in recent years, has two sites on the register – a €2.3 million plot of land on Cork Street and the former Zanzibar nightclub on Ormond Quay valued at €4.4 million. Since its inclusion on the register, the firm has lodged planning permission for an aparthotel on the Ormond Quay site.

Further west on Ormond Quay, the former Ormond Hotel, owned by Queens Park Rangers owner Tony Fernandes’ company Monteco Holdings, is also on the register. Monteco was last May given permission to demolish and redevelop a new hotel on the site.

Also on the North Circular Road, UK student apartment developer Ziggurat has a €10 million site on the register. Prominent house builders Castlethorn Construction, Ballymore Estates and Crekav, as well as supermarket Aldi, all have sites on the register.

The most expensive site listed is the former Player Wills cigarette factory on the South Circular Road, valued at €22 million. Its neighbouring site, the former Bailey Gibson packaging plant, is also on the register, valued at €12 million. Players Square Ltd had permission to build more than 500 homes on the combined sites, which are now under the control of receivers Grant Thornton.

The city council owns seven sites on the register with a combined value of more than €27 million. Most of these are former flat complexes which the council plans to redevelop such as O’Devaney Gardens and Dominick Street. Another is the old Readymix Concrete site in Eastwall bought for €23 million by the Docklands Development Authority, which has been subsumed into the council. It is now worth €5.5 million.

The Office of Public Works owns two sites on Military Road with a combined value of more than €17 million, which have been entered on the list; Nama owns one, a site on Sheriff Street valued at €12.5 million; St James’s Hospital owns two sites; and and the Mater Hospital owns one.

To be hit with the levy the vacant sites must be bigger than 0.05 of a hectare, excluding gardens. The majority of the site must be “vacant or idle” for more than 12 months, be zoned for residential or regeneration purposes, and be in an area in need of housing.

The council must notify property owners before June 1st, 2018 that they will be charged the levy in respect of that year and it will be payable in 2019, and every year thereafter until the site is no longer vacant.