Up to 1,000 electric bikes to be available for hire in Dublin

Two Irish companies, BleeperBike and Moby, will be licensed to hire out ‘pedelecs’ 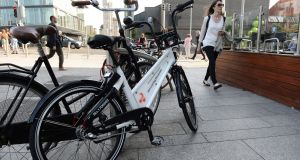 Customers will be able to electronically unlock the bikes using an app on their smartphone which will also allow them to locate available bikes. Photograph: Dara Mac Donaill / The Irish Times

Up to 1,000 electric bicycles will be available for hire on Dublin streets in the coming months with two separate companies due to launch similar operations in early Spring.

Dublin City Council has said that two Irish companies, BleeperBike and Moby, will be licensed to hire out “pedelecs” (electrically assisted pedal cycles) throughout the capital.

Unlike Dublin Bikes, the e-bikes will not be tied to specific docking stations but will be locked like regular bicycles at designated locations throughout the city.

Customers will be able to electronically unlock the bikes using an app on their smartphone which will also allow them to locate available bikes.

BleeperBike has already been in the market for more than a year, pioneering dockless bike rental in Dublin with some 450 non-electric bikes available throughout the city.

Its founder and chief executive Hugh Cooney said it will introduce 150-200 e-bikes initially and will gradually increase the number as demand increases.

The BleeperBike fleet will have replaceable batteries which can be switched for a fresh one when they have exhausted their charge.

The second licensee, Moby, is an Irish tech company best known for its innovative electric-powered mobility devices. It won the second licence last summer to operate a dockless on-street hire service for e-bikes.

According to Dublin City Council, Moby’s fleet of e-bikes, with bright yellow livery, is being tested ahead of its launch. The fleet will be comprised wholly of “pedelec” cycles.

While the company could not be reached for comment on how many cycles it will make available, reports have suggested it would launch with about 250 bicycles.

Mr Cooney of BleeperBike said that the operational area for the e-bikes will be the same as for its current service. It operates from UCD on the southside to DCU on the northside, as well as along the coast to Howth and Malahide.

The average journey length for a pedal cycle was about 3.5km, he said, but he expected electric-assisted bikes to be used for longer journeys, typically five to seven kilometres.

The price point for e-bike rental was still being worked out, but Mr Cooney said it would be at least double the charge of a push-bike. BleeperBike currently charges a minimum of € 1 per journey on its service.

Mr Cooney said he welcomed the fact that Moby was also entering the market. He said two operators in competition, both Irish-owned, would raise the profile of the service. He said the experiences in other cities throughout Europe showed e-bikes have had a transformative effect on urban and commuter travel.

He pointed to countries like Germany where e-bikes now outsell traditional push cycles. “Inside the M50 there is potential for a fleet of 5,000 shared e-bikes in the long-term,” he said.

The Irish operation of car share company Uber lobbied Dublin City Council chief executive Owen Keegan to introduce an e-bike share scheme in 2018. However, the council had already issued licences to BleeperBike, and to another company Urbo, to set up dockless sharing schemes for push bicycles.

However, Urbo subsequently withdrew from the scheme. The council then sought new licence applications allowing e-bikes for the first time.

The licences were then awarded to Bleeperbike and Moby. It is understood Uber did not apply for a licence.

E-bike sharing schemes are well-established in cities throughout Europe and the United States. The two big players in the US are Uber, and its rival car-sharing company, Lyft, both of which have invested heavily in sharing operations for power-assisted travel, including e-scooters.