Agency has responded to 50 forest fires across State, with the largest in the Slieve Bloom mountains

Coillte has responded to 50 forest fires during the recent heat wave. The largest fire is in the Slieve Bloom mountains on the Laois/Offaly border. Video: Irish Defence Forces 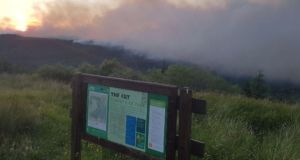 Sightseers are being warned to stay away from the Slieve Bloom mountains. Photograph: Offaly Fire & Rescue Service/Facebook

Coillte has urged the public not to engage in “fire tourism” as forest and gorse fires continue to rage across the country during the hot, dry conditions.

Almost no rainfall has been recorded at 24 of Met Éireann’s 25 weather stations during the last two weeks. Belmullet weather station in Co Mayo was the exception.

Forest fires have broken out in parts of Wicklow, Meath, Tralee, Kerry and Galway in recent days, Coillte said.

In the past ten to 15 days Coillte responded to 50 forest fires, 20 of which were significant, along with gorse fires. The largest fire is in the Slieve Bloom mountains on the Laois/Offaly border.

Firefighters, the Air Corps and Coillte are continuing to tackle the combined gorse and forest fire, which started overnight on Wednesday.

“Ourselves, the fire services and the Air Corps, everyone has been working extremely hard non-stop, and the fire has been contained and has stopped spreading,” Coillte spokesman Pat Neville said.

“It has been brought under control, but we are very dependent on the weather and the wind; it could escalate again, as everywhere remains so dry.”

Although there may be some light showers in parts of the country today, Met Éireann says it is not expecting any significant rainfall over the next ten days.

“Normally at this time of year the ground is not so dry, the grass is generally green and wet and lush; we really haven’t seen anything like this before, and the only thing that will really solve it is a good dose of rainfall,” Mr Neville said.

There have been several fires in the Dublin and Wicklow mountains, as the high peat content of the soil can lead to fires smouldering for some time.

Coillte has appealed to the public not to light any fires, including barbecues, in forests, or even on open spaces close to forests or gorse patches, and to stay away from areas where fires have broken out.

“I’m reluctant to use the term ‘fire tourism’, but we know that people can find fires exciting to look at. We really are urging people to stay away and in particular not to block access to forest roads, which can be very narrow, by parking on them, which blocks the emergency services.”

He said it was not yet known if any of the fires had been stated maliciously. “However, it is rare that fires start spontaneously, and we would ask people to report any suspicious activity to the gardaí and never to approach a fire.”

Kevin Kelly, advocacy and communications manager with the Asthma Society of Ireland, said people with respiratory conditions should be particularly wary of gorse and forest fires.

“People with asthma are more sensitive to changes in air quality. We would be urging people living near a gorse fire to keep their windows and doors closed, but also not to dry clothes outdoors, as the residual smoke can linger to clothes and cause problems. They should also carry their reliever with them when going outdoors.”

The Environmental Protection Agency has warned that air quality could be affected by the hot weather, with a risk of smog as ozone levels increase.