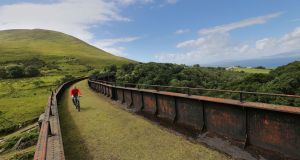 The Gleesk Viaduct which is part of the proposed greenway will require repair. Photograph: Valerie O’Sullivan

An Bord Pleanála’s approval for a 32km Ring of Kerry greenway on a disused railway line between Glenbeigh and Renard near Cahersiveen has been warmly welcomed in the region.

However, the accompanying approval for the compulsory purchase order (CPO) by Kerry County Council of more than 220 landholdings across 27 townlands has led to a note of caution from the Irish Farmers’ Association (IFA).

The land, once part of the Great Southern Railway, reverted to private ownership after the line was abandoned in 1960. The line was used to provide access for farmers and the fishing sector to markets in and outside the county.

The greenway project was announced in 2014 and was to be a flagship project for the network of cycleways promoted by the Department of Transport. The project is expected to cost more than €20 million and construction will involve some considerable engineering challenges.

Some of the most impressive structures that characterised the old rail line – the Caherisveen Railway bridge, Gleensk Viaduct and Drung Hill Tunnels – will need to be repaired. Underpasses of the N70 Ring of Kerry as well as a new bridge will also be built.

The application by the council under the Roads Act is for a 3m-wide paved surface, fencing, buildings, entrances and exits and carparks mainly along the rail corridor.

A lengthy oral hearing on the project took place last year and objectors included some landowners and environmentalists. The use of compulsory purchase orders proved a particular sticking point.

The IFA vigorously opposed the use of such orders, arguing the greenway was not public infrastructure in the normal sense of the term and the council had failed to engage fully with landowners.

An Bord Pleanála has approved the use of the orders, saying the greenway was in the interest and benefit of the public and community. It said there was a need “to provide a catalyst for the economic regeneration of the area”.

County council chairman Cllr Patrick Connor-Scarteenwelcomed the decision. He said it would provide an enormous boost for south Kerry, while local Fianna Fáil Cllr Michael Cahill has called it “a game changer”.

What about the Kerry slug?

The council told the oral hearing its motivation was to revitalise the area economically and socially, given the increased interest in cycling and walking.

Eleven conditions were attached to the planning approval, many concerning environmental matters, including that some of the scheme affecting the Valentia estuary be omitted. An ecologist must be employed to oversee species including the Kerry slug, the freshwater pearl mussel and other protected species like the badger, lesser horsehoe bat and otter.

There are several conditions related to road safety also, with cattle grids to be combined with chicane gates at intersections with access roads and driveways; and the steep gradients of some sections of the Ring of Kerry cycleway are to be well signalled. Speed limits are to be reduced on some sections of the N70.

The IFA said it is studying the implications of the decision and will be consulting with landowners. Projects such as this were important for tourism and the rural economy, said the IFA. However CPOs for greenways should be avoided and the approach in south Kerry had been “adversarial”.