Garden birds to see and hear without leaving home 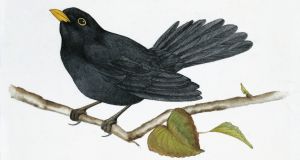 Birds are potent symbols of unconfined liberty. And even the caged bird sings.

At this exceptional moment, with our freedom of movement drastically but necessarily constrained, we are likely to feel a particular envy for the flight of seagulls beyond our windows, and also to understand something of that compulsion to keep singing when our wings are clipped.

But we can’t live by symbols alone. The actual birds that most of us can still see and hear, even from city flats, can enable us to focus on attractive creatures still going about their daily business, untouched by the crisis that overwhelms our world. That alone is a benefit.

If you have never much noticed birds before, this is a chance to learn the pleasure of getting to know some of the species that come to almost every garden daily. They may even be lured to apartment windows by attaching a seed or nut feeder, though supermarket supplies are, naturally, more limited every day.

And if you are an avid birder, this period is an opportunity to get know very familiar species much better. Have you always thought a male and female goldfinch are identical? Look more closely at their vividly multi-coloured plumage – you’ll need a minute or two, and binoculars – and you may find tell-tale differences.

Common garden birds fall into several broad groups: blackbirds and thrushes, tits, finches, as well as the robin, wren and house sparrow. Many other birds may frequent gardens, depending on the plants and habitats they offer. Lucky people may find woodpeckers, sparrow hawks, and even herons. You could also look and listen for migration overhead at this time of year.

You can find good advice on attracting and identifying garden birds, on https://birdwatchireland.ie/irelands-birds-birdwatch-ireland/, where you can also record your sightings, contributing to conservation efforts.

A plethora of visual and audio aps and guides are available, but for an introduction to common songs try this: https://greennews.ie/know-your-birdsong-click-through-our-quick-guide-to-the-calls-of-common-irish-birds/Here are brief introductions to some of your most likely visitors.

Blackbird
Easy-peasy, right? (see main photo above). Well, the male is certainly distinctive: glossy black all over, except for a Day-Glo orange-yellow eye ring and beak, the latter most vivid in spring. Unlike the crows – jackdaws and rooks, also black – that are likely to visit you, the blackbird is elegantly slender, and has a liquidly musical song. The female, however, might be confused with a thrush: nondescript brown, with variable lighter streaking on the breast, and a duller beak.

Song thrush
Same size and shape as the blackbird, but chocolate brown above, and arrowhead small spots on contrasting buff breast and white belly. Loves to sing conspicuously from high perches, a wide repertoire of rich notes, typically repeating them individually or in small groups. Like the blackbird, hunts for worms in lawns, and partial to berries.

Chaffinch
Half the size of blackbird, with the stout seed-eating bill typical of finches. Male has rich pink breast, throat and cheeks, a grey hood and black and white flashes on wings. The female is a grey-brown echo of the male’s patterns. He sings frequently, repeating the same loud, descending phrases. Birders will focus on the red-brown mantle (back), distinguishing our version from some continental and African sub-species, where it is greenish.

Goldfinch
Our showiest and most exotic garden bird. Chaffinch-sized, with a bright red ‘face’ around a pinkish bill, framed boldly framed in black and white. It has striking yellow-and-black wings, which also show strong smart white spots while perched. Light brownish back and breast. Sexes appear identical, but birders can find details that may betray gender: https://two-in-a-bush.blogspot.com/2014/02/sexing-goldfinches-photographic-study.html

Great tit
The largest of this somewhat unfortunately-named but very common group (etymology: titmouse-‘small bird’). It displays an olive-green back, dramatic black and white contrast on the head, and a broad black stripe on its bloated-looking yellow breast and belly. Constantly active and acrobatic, usually in small flocks with other tits. Its most typical high-pitched call sounds like “teach-er, teach-er”. Birders will look for the female’s broken, weaker breast stripe.

Blue tit
So common that some birders, unforgivably, dismiss it as a “trash bird”. This endearing bird is like a smaller version of the great tit with blue wings and tail, and blue replacing black on the crown, especially luminous in the male. Often seen with coal tit, similarly sized, but patterned like a great tit, in drab brown-greys.

Long-tailed tit
Less common than the other tits, only likely if you have woods near or in your garden. But a party of these birds hanging on a single feeder is a magical sight: cute black, white, and rusty puffballs with tails – longer than their bodies – at all angles, giving the impression of a single and bizarre sea creature.

Wren
One of our smallest – and most common – birds, this tiny brown bundle is more often heard than seen, but still visible enough. It trills with a voice five times its size from the heart of a bush, before shooting low, straight as a bullet, to another. It sings in more exposed positions, too. Watch for the minuscule tail, held proudly erect at right angles to the body, and seeming to vibrate with its song.

House Sparrow
Almost a synonym for small brown bird, this sparrow has declined in rural areas, but is still very common in suburbia. The stocky male is a rich brown, with a contrasting grey cap. The size of the black patch on its grey breast reflects its social and sexual dominance. The much duller (to our eyes) female resembles the female chaffinch but has bold black and buff streaks on its back.

Robin
Probably the best-known bird in European cultures, its fearlessness around gardeners gives it a name for kindly friendship. I’m afraid it’s just using you to dig up its dinner, while scaring away its predators. Its iconic red breast – actually fringed in the most delicate blue-grey – gave rise to legends: it was washed in Christ’s blood when it gently removed a thorn from his crucified brow. Or it got burned fanning the embers to keep the baby Jesus warm.