Green-letter day for Ireland as young environmentalists take over

Thousands of Irish students join school strikes across the planet 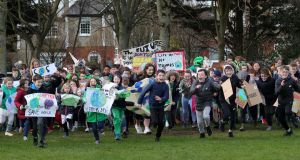 Children from Glasnevin Educate Together National School in Dublin holding a protest to raise awareness of the urgency for positive action in addressing climate change. Photograph: Colin Keegan, Collins Dublin

Friday March 15th, 2019, will go down as a green-letter day in Ireland when a new generation of young environmentalists, energised by a lack of adult action on climate change, took over the national stage.

With public protests scattered throughout the country, the day of action by school climate strikers added up to an environmental stance of unprecedented scale.

Their action was in solidarity with 16-year-old Greta Thunberg who embarked on a lone strike outside the Swedish parliament last year. That sparked the Fridays For Future movement – an unstoppable force made possible by the good side of social media networks.

It culminated on Friday with its biggest statement yet; co-ordinated “school strikes” held across the planet from the South Pacific to the edge of the Arctic Circle.

With the backing of a solar-powered sound system, Theo Cullen-Mouze, a 16-year-old from Clare Island in Co Mayo, told the Dublin crowd: “Greta Thunberg has inspired me. We owe her more than mere words . . . Humanity has created a problem and humanity must solve it.”

The hundreds of posters on display had a disarming directness about the climate issue and political failure to address it.

One displayed close to the stage was an arresting colour painting of Greta Thunberg with the words “Dublin for Climate Action”.

The teenager herself was continuing to deliver her blunt message, firmly aimed at adults and especially politicians. She told a rally in Stockholm that the world faces an “existential crisis, the biggest crisis humanity ever has faced, and still it has been ignored for decades. And you know who you are, you that have ignored this”.

Covid-19 vaccines ‘not rushed’ as science to develop them already existed, says WHO 09:26
Cold, frost and icy stretches forecast for rest of week 08:14
Putting our frontline workers up in lights for Christmas 07:00
Evolved to run – but not to exercise 06:00
Watchdog ‘concerned’ at Renua failure to account for State cash 03:00