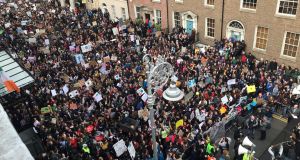 Young people across Ireland are protesting this lunchtime at 37 rallies seeking urgent action to address the growing threat of climate breakdown.

The events, being staged in solidarity with the global schools strikes for climate action movement, prompted by the Swedish teenager Greta Thunberg.

They are being supported by parents; teachers, third level students, NGOs and members of the public.

The largest Irish events are happening in Dublin outside Dáil Éireann, in Cork outside city hall and in Maynooth where two secondary schools sent messages to parents encouraging students to participate. A large number of students and staff from Maynooth University left the campus at noon and joined the students gathered at Courthouse Square.

In Dublin, an estimated 10,000 people have gathered to protest.

Other big public protests are taking place in Galway, Limerick, Waterford and Sligo. The biggest rally in the North is in Belfast.

Smaller Dublin events are being held in Blackrock; Blanchardstown, Glasnevin, Glenageary and Lucan.

In addition, numerous schools, especially primary schools, staged climate events this morning on their own premises.

Cork teenager Saoi O’Connor from Skibbereen Community College has been mounting a Friday protest outside Cork City Hall every week since early January, but did not make the rally today after she got delayed coming back from Strasbourg, where she attended a press conference held by students at the European Parliament this week.

She tweeted her disappointment to protestors this morning: “You guys I am beyond gutted to tell you that I won’t be able to be at @F4FCork tomorrow. I cannot express how upset I am about this, this strike is my baby and I built it up from scratch, I started with just me alone sitting outside City Hall.”

“This strike has been my entire life for the past 10 weeks, I cannot believe that I am missing the big day, but I will be there in spirit,” she told The Irish Times. “Unfortunately the Eurostar delayed us by six hours, so we couldn’t make our connecting train or ferry, we’re striking in London instead.”

By mid morning, hundreds of thousands of young people throughout the world had embarked on climate protests – rallies are being staged in 105 countries under the “Fridays for future” banner.

Speaking in advance of the Irish protests, An Taisce’s Climate Change Committee spokesman John Gibbons said action was now more important than ever, “since accelerating climate change and biodiversity collapse are the greatest threats facing today’s youngsters in their adult lives”.

An Taisce stood behind the young people taking to the streets, “and we emphatically support their demand that the Irish Government honour its legal and moral commitments under the Paris Agreement on climate change”, he added.

We share their sense of outrage that instead of being a leader, he said, Ireland was instead among the very worst states in the EU on taking meaningful action to tackle climate change and help avert the catastrophic consequences that every major scientific institution in the world has warned are becoming ever more likely.

“That Ireland has used its influence at EU level to delay meaningful climate action, acting at the behest of powerful lobby groups, is a source of national embarrassment and international shame,” Mr Gibbons said.

“Today’s children and teenagers are the young voters of tomorrow, and they will, in their tens of thousands, sweep politicians from power who continue to bend the knees to vested interests and look the other way as environmental destruction continues unchecked,” he warned.

For Ireland, the march was a crucial first step “on the road from climate laggard to achieving meaningful climate action on behalf of Irish young people and future generations, and for the security of our planet’s biosphere”.

“It is long past time that we behaved as a responsible modern state that places sustainability and the needs of the future at the heart of all decision-making,” he said.