Green bin charges for all ‘inevitable’ 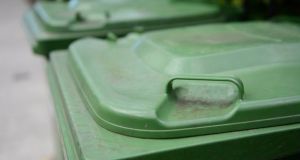 Households across the State will “inevitably” have to pay to have their green waste recycled, the head of the Government’s price watchdog for the industry has warned.

Eight out of more than 40 waste firms monitored by the Price Monitoring Group (PMG) are already charging for recycling, according to its chairman, Frank Conway.

He said the new charges being levied on consumers arose from price instability due to the closure of the world’s largest recycling market in China, where most of Ireland’s recyclable waste has traditionally ended up.

Following the announcement by waste company Panda of new green bin charges for its 250,000 customers, Mr Conway said the Chinese decision had “sent a shot across the bow of how we must all think about waste in the future, including how we manage it along every step of the journey, from purchase to leaving our homes”.

Panda chief executive Des Crinion has given a commitment to freeze charges for recycling bins for five years. The company says the average cost of the green bin service for households, to be levied first in Fingal and Dún Laoghaire, will be €21 a year.

The new charge was necessary to support a recycling industry in Ireland, and to avoid sending material for recycling to landfill or incinerators, as happens in other countries, he said.

Mr Conway said the PMG is monitoring impacts on waste charges and will report to the Government on recent “turbulence” in the market.

The group was set up in September 2017 by Minister for Environment Denis Naughten to monitor on-going cost of residential waste collection to homeowners as the “flat-rate structure” was being phased out. Prices had been broadly stable, he said, but this changed in recent months.

A total of 19 waste collection companies are “mystery shopped” each month, he said. “Companies charge for waste collection differently, there is no uniform price in place but the group identifies all of the key price variables, including annual or monthly service charges, waste lift charges, recycling lift charges, organic lift charges, excess per kilogramme charges and so on.”

Mr Conway added: “For householders, given that the Chinese decision is likely to be a permanent arrangement, it will mean that we must give greater consideration to the amount of waste we create, including recycling.”

For homeowners who were keen to keep their waste and recycling volumes low, a number of Government-led initiatives provided advice on how to reduce, reuse and recycle waste, he said.

The decision by Chinese authorities will most likely lead to a recycling costs increasing globally, a spokesman for Minister Naughten said. “The Minister... and his officials are liaising with the waste regulatory authorities and the waste industry,” he added.

The Competition and Consumer Protection Commission (CCPC) is also conducting a separate study on the operation of the household waste collection market, the spokesman said. “The results from the PMG are being monitored and analysed and in conjunction with the study being undertaken by the CCPC will provide an evidence base regarding the future monitoring and inform future decisions in relation to the waste market.”