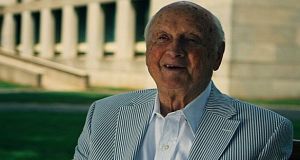 Kevin Roche was born in Dublin, received a Bachelor of Architecture from the National University of Ireland in 1945 and after gaining experience in the capital with Michael Scott and in London with Maxwell Fry, he moved to the US in 1948. Photograph:

Working mainly across the US since the 1950s, Roche was responsible for the design of more than 200 buildings, including art galleries, office blocks, university buildings and even zoos.

He was possibly best known in America for his long association with the Metropolitan Museum of Art in New York, which he extensively remodelled, building new galleries including one housing the Egyptian Temple of Dendur.

Born in Dublin in 1922, Roche grew up on a farm in Mitchelstown, Co Cork where his father founded the Galtee Cheese company and later opened a piggery, where the young Roche secured his first design commission.

His formal architectural education was in UCD. After graduating in 1945 he began work with Dublin architect Michael Scott on the design of Busáras and Donnybrook bus garage.

He later moved to London to work for Maxwell Fry, before crossing to the US in 1948 and working for Mies van der Roe.

In 1950, Roche joined the firm of Finnish futurist Eero Saarinen, where he met his wife Jane. When Saarinen died suddenly in 1961, Roche and his colleague John Dinkeloo took over several of their late mentor’s grander unfinished projects, notably the Gateway Arch, the TWA Flight Centre at JFK International Airport, and Washington DC’s Dulles International Airport.

In 1968 the firm’s Ford Foundation headquarters on East 42nd Street was the first modern building to be laid out around a plant-filled atrium. The New York Times said it was “probably one of the most romantic environments ever devised by corporate man”.

In 1982, Roche became one of the first recipients of the Pritzker Prize, generally regarded as architecture’s equivalent to the Nobel prize. Following this accolade Roche’s practice went global, receiving commissions for buildings in Paris, Madrid, Singapore and Tokyo. He completed his first and only Irish project, since his move to the US, the Convention Centre Dublin (CCD) in 2010.

Speaking to The Irish Times in 2017 following the release of a documentary about his work, called Kevin Roche: The Quiet Architect he said: “On occasion, there’s a big gesture, and that’s okay...But I’m basically a problem-solving construction guy.”

Paying tribute on Saturday, CCD executive chairman Dermod Dwyer said Roche designed “every facet of this building right down to the door handles.

“The CCD design turned it instantly into an iconic building on the banks of the Liffey. It stands is a fitting legacy for this extraordinary Irish man.”