Global warming: Should we be worried about coastal flooding? 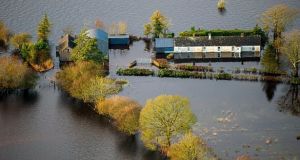 Ireland is overdue a 3m storm surge, long before the end of the century. File photograph: The Irish Times

An evaluation of global coastal flooding risk up to the end of the century, including possible impact on economies and those living on coastlines, puts northwestern Europe firmly with regions in the most vulnerable category.

That Ireland is not at the worst level of risk within that region is not much consolation, given researchers at the University of Melbourne and the University of East Anglia indicate much of Ireland’s east coast, south west and western seaboard is vulnerable in an extreme scenario where sea level rise and a storm episode combine.

The highest level of extreme episodic sea level rise – 5m to 9m – is predicted for the northwest and east of England, south Wales, northwest France and northern Germany.

It shows Ireland is highly affected by storm surges, says Dr Lisa Orme – an expert on coastal and storm risk at Maynooth University. Moreover, by the end of the 21st century storm surges 2.5m to 5m are predicted.

“It is important, however, to note the study doesn’t consider possible changes in storm frequency or intensity, changes in the amount of rainfall or changes in our society, such as urbanisation. If these increase in future there is likely to be a higher frequency of coastal flooding events in future in Ireland,” says Orme.

Up to fairly recently scientists could not pin particular extreme weather events to rising greenhouse gas emissions. But of late they have become much more accurate on estimating if a natural disaster is due to global warming caused by human-induced emissions. The science is called “extreme event attribution”.

It entails comparisons between real observations of weather events and computer simulations of a world with and without the approximate one degree increase caused so far since pre-industrial times.

The same applies to modelling of flooding scenarios, as outlined by this latest research of coastal flooding risk – that the exercise is possible up the end of the century is remarkable.

Climate science sceptics have been critical of such studies in the past, claiming insufficient account is taken of the ability of countries to adapt to a warming world and of human resourcefulness, not to mention extreme flooding defences already in place.

But increasingly reliable data is indicating the sheer scale of impact is likely to be far greater than unreliable predictions of the past. In such circumstances, banking on “we will adjust on time” seems reckless.

What Irish cities are at risk?

Already it is clear that all major Irish cities, which are at the mouth of estuaries, are vulnerable – with Cork and Galway most at risk. Dublin by virtue of sheer size and proximity to the coast risks experiencing most damage, as recent projections by Gamma Location Intelligence suggest.

In this study, the researchers have combined many factors and outlined efforts to make their modelling as robust as possible. “Required simplifications may result in local errors but the model adopted reproduces extreme sea levels to reasonable accuracy at national and global scale,” they note.

Although the public tends to focus on rate and magnitude of increase in mean sea level, the threats of coastal flooding and erosion are significantly affected by episodic storm surges and wave patterns (including temporary increase in mean water level caused by breaking waves) as well as their time of occurrence in relation to astronomical tides.

Temperature increases will cause sea levels to rise and bring about more extreme weather events, leading to greater and more frequent coastal flooding, notably due to storm surges – Ireland is already overdue a 3m storm surge, long before the end of the century.