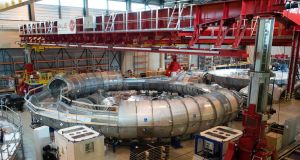 The winding facility for the construction of poloidal field coils during the launch of the assembly stage of nuclear fusion machine Tokamak of the International Thermonuclear Experimental Reactor (Iter) in Saint-Paul-les-Durance, France. Photograph: Clement Mahoudeau/AFP via Getty Images

The world’s largest nuclear fusion project moved to “assembly phase” on Tuesday in southern France, with the first ultra-hot plasma energy source expected to be generated in late 2025.

The €20 billion Iter project will replicate reactions that power the sun and is intended to demonstrate that fusion power can be generated on a commercial scale.

The landmark is the culmination of an international collaboration initiated in 2006, and was marked by an online ceremony noted for the degree of co-operation and goodwill between the EU, China, Russia and the US. The project was conceived in 1985 but has suffered delays.

Nuclear fusion promises clean, unlimited power with none of the notorious waste associated with nuclear fission reactors. Despite 60 years of research, it has yet to overcome the technical challenges of harnessing such extreme amounts of energy.

Smaller micro fusion reactors have been manufactured and been combined but have yet to produce energy at scale. With minute amounts of fuel there is no physical possibility of a runaway accident with meltdown, according to those developing the technology.

In the most complex engineering endeavour in history, millions of components made in a large number of countries will be used to assemble the giant reactor in Provence, which will weigh 23,000 tonnes. Some 10,000 people are directly employed on the project.

The technology combines the hottest and coldest materials to generate an energy source. Almost 3,000 tonnes of superconducting magnets, some heavier than a jumbo jet, will be connected by 200km of superconducting cables, all kept at minus 269 degrees by the world’s largest cryogenic plant.

President Emmanuel Macron launched the assembly phase, alongside senior figures from Iter members, including the UK, India, Japan, and Korea.

Iter was “a project for the future of humanity” and illustrated that people working together were stronger, Mr Macron added.

South Korean president Moon Jae-in said his country remains committed to a historic international project that “seeks to create an artificial sun through fusion technology” and to generate an “energy source of dreams”.

“Enabling the exclusive use of clean energy will be a miracle for our planet,” said Iter director-general Bernard Bigot. Fusion, alongside renewable energy, would allow transport, buildings and industry to run on electricity, he predicted.

But he added: “Constructing the machine piece-by-piece will be like assembling a three-dimensional puzzle on an intricate timeline . . . with the precision of a Swiss watch.”

Nuclear fusion releases vast amounts of energy when heavy hydrogen atoms fuse together, but this requires a temperature of 150 million degrees, 10 times hotter than the core of the sun. The hydrogen fuel is obtained from seawater and just a few grammes is needed but huge magnets are required to contain the plasma in a doughnut-shaped vacuum chamber known as a tokamak – first developed in the Soviet Union.

Like conventional nuclear fission reactors, the process itself does not produce climate-warming carbon dioxide, but fusion reactors cannot melt down and produce far less radioactive waste.

The Iter project will be the first to achieve a “burning” or self-heating plasma and is expected to generate 10 times more heat than is put in; far more than any previous attempt. It will also use a significant amount of electrical energy when it is running, to power the magnets and scientific instruments. But it is intended to be a proof-of-concept of large-scale fusion, not a design for a future commercial reactor.

Among the components being assembled is the 30-metre-diameter cryostat, manufactured by India, which surrounds the reactor and keeps it at the extremely low temperature required. One of the electromagnets, called the central solenoid and built by the US, will have the magnetic power to lift an aircraft carrier.

There are numerous private-sector companies pursuing nuclear fusion via much smaller devices, including Tokamak Energy, based in the UK, which has raised £117 million (€129 million) in investment. Its executive vice-chairman, David Kingham, said: “We welcome the progress at Iter which we see as a great scientific project and a major endorsement of tokamak devices.”

“But we are convinced that faster progress is possible, driven by the need for more carbon-free energy and enabled by private investment, modular designs, new materials and advanced technologies,” he said.