The Irish Times view on population trends: going into reverse 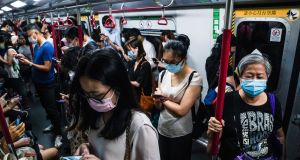 Using advanced models to forecast mortality, fertility and migration, a Lancet study concludes populations of at least 23 countries could shrink by more than 50 per cent. Photograph: Lam Yik/Bloomberg

A study predicting the global population could peak at 9.7 billion by 2064 – nearly four decades earlier than predicted by the UN – and decline to 8.8 billion by 2100 is welcome in one respect. Earth is under immense environmental strain, with the likelihood it will soon be hit by accelerating impacts of climate disruption. At another level, the Lancet forecasts point to likely shifts in power bases across continents; “a revolution in the story of human civilisation”. Countries face a rapid ageing of their populations which will place enormous strain on their societies. To what extent and in what form migration is used to support their economics will become critical in the second half of the century.

Using advanced models to forecast mortality, fertility and migration, the study concludes populations of at least 23 countries could shrink by more than 50 per cent. Ireland is set to have a more stable transition, yet will experience a dramatic ageing of its population.

Given upheaval is less than a generation away, collective engagement on the issue between wealthy and poor countries is needed. The challenges will not be resolved by nationalistic self-interest and closed-door policies.

An underlying reason behind the study’s conclusions is improvement in access to contraception and the education of girls and women, which will “hasten declines in fertility and slow population growth”. Responding to population decline is likely to become an overriding policy concern in many countries, but must not compromise efforts to enhance women’s reproductive health or progress on women’s rights.

“Nations would need to cooperate at levels that have eluded us to date to strategically support and fund the development of excess skilled human capital in countries that are a source of migrants,” said Prof Ibrahim Abubakar of University College London. With climate change and greater migration, the distribution of working-age populations “will be crucial to whether humanity prospers or withers”. The case for collective action could not be clearer.