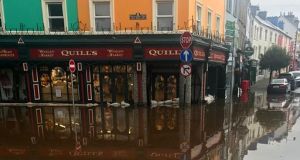 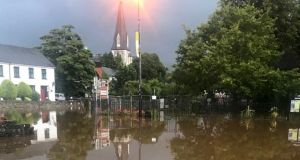 A major clean-up operation has begun in Kenmare in Co Kerry after torrential rain overnight left a number of business premises in the centre of town under water.

Localised flooding has also hit several other towns and villages around the Ring of Kerry.

According to Kenmare councillor and Mayor of Co Kerry Patrick Connor Scarteen (FG), flood waters appear to have built up gradually overnight. However at about 5am trader began to become concerned and contacted Kerry County Council for assistance.

“The Square got a pretty bad doing. I’m only a couple of doors up Main Street from where the flooding happened so we were lucky to escape it but Kerry County Council fire crews have been pumping out of some of the affected premises assisted by council staff,” he said.

“The workers have been fantastic. They were out really early, helping people to clean up. There have been a number of yellow warnings recently including a few recently when very little rainfall fell but last night seems to have been different and unfortunately the Square got badly hit.”

The flooding was confined primarily to the Square in Kenmare and nearby Main Street and Henry Street escaped. Several businesses on the Square ended up under a foot or more of water early on Thursday morning.

Cllr Connor Scarteen said Kenmare previously suffered extensive flooding in 2008 when the Square was also hit . He said he had been in touch with Minister of State with responsibility for the OPW, Patrick O’Donovan on Thursday this morning to raise the issue with him again.

“I was in touch with Minister O’Donovan to impress upon him the urgency of progressing the CFRAMS (Catchment Flood Risk Assessment and Management) plan for Kenmare. Some minor work has been carried out but we see some major work done now as a matter of urgency.”

It is understood that Kerry County Council staff are investigating whether a branch may have got caught on a footbridge over the Keelnagower stream, a tributary of the Finnihy River, which led to debris building up there and may have contributed to the flooding .

Elsewhere in south Kerry, the N70 Ring of Kerry road was closed to traffic from near Sneem National School to Caherdaniel due to flooding. Motorists were asked to use alternative routes and council staff cleared debris from the road near Blackwater Bridge between Kenmare and Sneem.

Further south on the Iveragh Peninsula, the Ring of Kerry road was also closed at Inny Bridge between Cahersiveen and Waterville when flood waters made the road impassable while the road was down to one lane due to surface flooding at Foilmore National School, north of Cahersiveen.