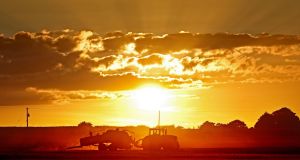 With staycations never more popular or warranted, would-be holidaymakers will be scrutinising Met Éireann’s weather reports from this week as the summer holiday season gets properly underway.

Given the extremely good weather at the outset of the Covid-19 pandemic in Ireland, everyone knows exactly how good things can get at home, and yet it remains stressfully unpredictable for those about to pack up the family car.

Monday appeared to offer a promising outlook for the week, but do not be fooled. Anything can, and probably will, happen.

“I wish I had really good news but the best day of the week is today,” said Met Éireann forecaster Liz Walsh, with a note of sympathy for holidaymakers.

“The general idea is that we have a lovely day today and pretty much a lovely day tomorrow but then after that it gets a little bit more complicated and changeable.”

The nub of the matter is that for anyone hitting the highways this week, head south and east for the best possible chance of a summer’s day. Although nowhere in the country will be spared at least a little rain this week.

An Atlantic warm front is due to approach the west coast from Tuesday and while that will bring an end to the relatively cool July evenings, it will also bring cloud.

“After tonight, the nights are going to get warmer so if someone was going camping they might be interested in that,” said Ms Walsh.

“The nights will get a little more humid and more seasonal but with the warmer temperature comes cloud.”

This resulting rain and drizzle, though patchy and unlikely to wash away any family tents, will be mainly confined to the west and north of the country, from about Wednesday onward.

But there are other silver linings in these clouds, notes Ms Walsh. “Today we are struggling to get to 18 [degrees] but over the next few days it will be 18 to 21. The temperatures won’t be too bad but it’s just cloudy with it.”

It looks like Friday will dump a little bit of rain on everyone before the country gets back under a little low pressure by next weekend.

As with any Irish summer, it is all a gamble - while this week may not be the best on offer, it is proving difficult to determine what will come later.

Ms Walsh said the weather signal for a longer term outlook is currently neutral. “It could go either way. August into September is notoriously difficult to forecast,” she said.

In general terms, Wednesday to Friday looks humid, damp and misty in many parts of the country with temperatures hovering between 17 and 21 degrees.

“Some uncertainty for the outlook but current indications for the weekend suggest that the rain will slowly push eastwards on Saturday during the day with most areas dry by evening,” Met Éireann reports.

“Some further outbreaks of rain and drizzle expected on Sunday. Maximum temperatures of high teens to low twenties.”