Tillage has strong environmental benefits compared to other types of farming, report says 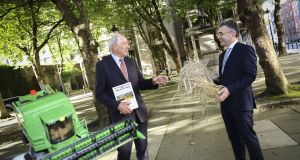 The vulnerability of the tillage sector has been highlighted in a report showing a sustained decline in land used for tillage crops, despite their importance in supporting the authenticity of world-famous Irish food and drink brands.

The sector generates €1.3 billion in economic outputs annually and supports 11,000 jobs, according to the report commissioned by Tillage Industry Ireland, which also underlines the low carbon footprint of tillage farms compared to dairying and beef production.

In an economic evaluation of the sector, agricultural economist Prof Michael Wallace of UCD School of Agriculture and Food Science also examined the implications for greenhouse gas emissions of loss of land area used for tillage activities as Ireland struggles to meet EU commitments to reduce emissions.

The land area and number of farms on which tillage activities take place have been declining, it confirmed. The area under tillage has declined by 15 per cent over the past decade and by 42 per cent since 1980.

“Much of the better land lost to tillage in the south east and south west over the past decade also coincides with the expansion of dairying activities.”

While there has been a decline in acreage, output has remained the same. “The Irish tillage sector is highly productive and produces amongst the highest yields anywhere in the world,” it finds.

Almost half of direct output in value terms are feed cereals for livestock, 13 per cent are potatoes, 8 per cent malting barley and 11 per cent is straw – just 1 per cent of output is milling wheat.

Tillage activities have strong environmental and biodiversity credentials compared to dairying and drystock activities, it concluded.

Prof Wallace added: “The current and potential contribution of the tillage sector, both environmentally and economically, should be more explicitly recognised in a balanced agri-food strategy for Ireland.”

“A vibrant Irish tillage sector is critical to many rural communities, particularly in the east and the south. It is also important in helping to validate the authenticity of many world famous Irish brands,” said TII president Matt Dempsey.

“But, as Irish cereals slide down the self-sufficiency scale for animal feeds and distilling, we are risking a backlash from consumers in international markets. The tillage sector generates high output in crop yields but it is also high cost in land inputs. It needs to retain scale and critical mass to remain viable,” he added. This needed to be backed by a quality assurance scheme highlighting the provenance of Irish products.

Tillage farmers have to cope with climatic conditions making some crops prone to disease, including fungal diseases in grain crops, the report points out. Plant protection products (PPPs) provide a defence “but increasing restrictions on the use and authorisation of PPPs in Europe is limiting the access of growers to an effective “toolbox” to control disease and ensure the competitiveness of Irish-grown grain.”

This in spite of crops and feedstuffs made using PPPs and technologies not allowed in Europe being imported into the EU.

Biotechnology can support development of more resistant varieties, but the EU regulatory environment “is inhibiting critical aspects of crop science innovation which places Irish and European growers at a competitive disadvantage”, it adds.

“We need a regulatory environment that both protects the environment and supports innovation, and policy responses that halt the decline in acreage of the last decade and more, and equip the sector to grow and replace imports of feed grains and other crops,” Prof Wallace commented.

Tillage activities take place on some 10,000 Irish farms representing an area of about 340,000 hectares – 7.6 per cent of the utilisable agricultural land area. About half of these farms are specialist tillage units with average income performance which is second only to dairying. Mainly tillage farms have twice the income of beef and sheep farmers.

Minister for Agriculture Dara Calleary said the report highlighted the sector’s many favourable environmental and sustainability credentials – and significant potential to replace imports.

While the sector mainly supplies feed grains to the livestock sector, “it also produces a range of raw materials for the drinks industry and is a producer of high quality oats that are used in food production and feed markets, and exported around the world”, he added. “This will become even more important as international trade comes to terms with the diverse challenges that lie ahead.”