Forty Foot clear but swimming ban extended at other beaches 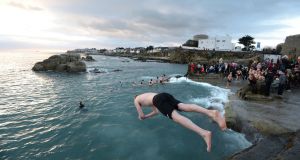 The council said the bathing prohibition at the Forty Foot in Sandycove had been lifted as water quality had returned to acceptable levels. File photograph: Dara Mac Donaill

The ban on swimming at the Forty Foot has been lifted but Dún Laoghaire-Rathdown County Council has extended the bathing prohibition notices for four other beaches.

The council said in a statement on Monday evening that, pending results of water quality testing, the bathing ban would remain in place at Seapoint, Sandycove, White Rock and Killiney.

Beaches were shut down to swimmers on Friday for the fourth time this year following another wastewater overflow at the city’s treatment plant in Ringsend.

The statement said water quality tests carried out on Friday and Saturday had found elevated E.coli levels at Seapoint and Killiney but they had since returned to acceptable levels. However, in response to advice from the HSE and given results for intestinal enterococci were not yet available, the council decided to extend the ban until it could confirm bacteria levels in the water had reduced.

It said samples were taken on Sunday morning at Dollymount, Sandymount and Merrion and further samples would be taken on Monday. The council said results would not be known until Tuesday afternoon.

“When these results are assessed, and in consultation with the HSE and the EPA [Environmental Protection Agency], a decision will be made on whether to remove the bathing prohibition notices,” a city council spokeswoman said.

“Dublin City Council notes also that there is already a season-long prohibition of bathing in place covering Sandymount and Merrion beaches and this will remain in place, regardless of the results of these most recent samples.”

Seasonal bans in place at Merrion and Sandymount beaches are due to ongoing issues around bacterial levels in the water.

Wexford County Council said Duncannon beach had been temporarily closed to swimming due to poor water quality. It said it would review the ban when it received further test results which were due within 48 hours.

Overflows at the Ringsend plant occur due to sudden and rapid rainy spells during which large amounts of water falls in a short period of time. This “storm water” mixes with the network’s “wastewater” and runs into overflow tanks. However, when these tanks reach capacity their contents are vented into the sea at Poolbeg.

Testing of water quality is then undertaken, usually for a couple of days, during which time precautionary steps are taken to keep people out of the sea. Irish Water maintains that what is ultimately released into the environment is “heavily diluted” and already screened to remove debris.

The utility reports incidents of discharge and overflow to the EPA. In the first half of this year there were seven incidents of storm water overflow at Ringsend between March and August.

A €400 million upgrade is ongoing at Ringsend and the capacity of its overflow tanks will be increased and such incidents “will be fewer in number although in extreme weather conditions they could still occur,” Irish Water said.