‘If you’re stuck in bed, you’ll miss the celestial fireworks display of the year’ 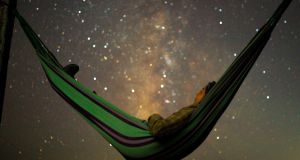 A girl lies in hammock as she looks at the Milky Way during the peak of Perseid meteor shower in Kozjak, Macedonia last August. Photograph: Ognen Teofilovski/Reuters. 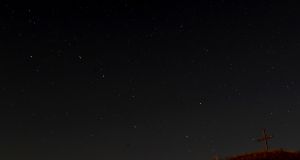 The star constellation Ursa Mayor (Great Bear) is seen in the sky over Leeberg hill during the Perseid meteor shower near Grossmugl , Austria on Sunday. Photograph: Leonhard Foeger/Reuters. 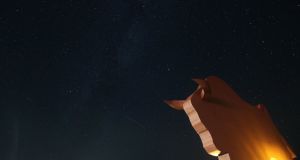 A statue of a bison stands on a hill during the Perseids meteor shower near the village of Petkovichi, Belarus in the early hours of Monday. Photograph: Tatyana Zenkovich/EPA.

Fireballs and shooting stars await stargazers with an eye on the sky on Monday night with the annual Perseid meteor shower set to reach its peak in the early hours.

The shower is one of the most reliable events of the astronomic calendar, and can be observed with the naked eye under clear skies.

This year, because of an almost full moon, many of the meteors will be drowned out by moonlight. Stargazers can still expect to see around 70 shooting stars per hour, with the most intense showers at 3am.

On clear nights in recent years, spectators have been greeted by as many as 150-200 meteors an hour.

The meteors can be smaller than a grain of sand but travel at speeds of 58km per second, before burning up at temperatures of 3,000 to 10,000 degrees in the Earth’s atmosphere.

David Moore, the founder of Astronomy Ireland, said he had been watching the Perseids since he was 11. With the moon blotting out smaller shooting stars, Mr Moore advised stargazers to “stand with your back to the moon, look to the darkest part of the sky in the north, and you’ll see at least one a minute”.

To those wary of a late Monday night, he warned: “If you’re stuck in bed, you’ll miss the celestial fireworks display of the year.”

The Perseids, so called because they radiate from a point in the constellation Perseus, were linked to the comet Swift-Tuttle in 1862 by the Italian astronomer Giovanni Schiaparelli in 1862.

Although it peaks tonight, the meteor shower is expected to continue until August 24th due to the size of the dust stream.