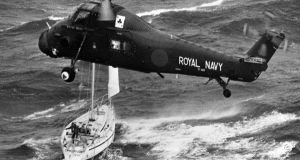 A Royal Navy helicopter hovering over the stricken yacht Camargue, ready to winch up the last of eight crew members in the wake of the Fastnet race disaster. File photograph: PA/PA Wire

Today is the 40th anniversary of the Fastnet Race disaster in August 1979, when a severe storm caused the deaths of 15 of the competing yachtsmen and four spectators following the fleet.

It led to a massive operation – estimated to be the largest in peacetime – launched from Ireland and Britain to rescue stricken yachts and to retrieve the bodies of those who had perished.

The race, the 28th Royal Ocean Racing Club’s Fastnet Race, got under way on August 11th. Participants expected to take three to five days to complete a course starting from the Isle of Wight, crossing the Celtic Sea to round the Fastnet Rock, about 13km south of the Cork coast, and returning to Plymouth.

While the race is regarded as technically difficult the risks of encountering severe weather were considered slight. It was summer, after all, and while fresh to strong winds had been encountered in a few of the previous races, the possibility that boats might have to battle against storm force winds seemed remote when the race began.

The forecasts of the day were left wanting. Most of the competitors got their forecasts from BBC radio. At 1.55pm on August 13th – about 10 hours before the storm arrived in the Fastnet area – the forecast was for winds increasing to force 6 or 7 (the latter a “near-gale”). It was not until 11pm that night that the forecast mentioned “severe gale force 9, increasing storm force 10, imminent”.

The 1979 Fastnet Race Inquiry, available online, noted: “By the time Force 10 was forecast, Force 10 was already there.” Local forecasts from Met Éireann (then known as the Irish Meteorological Service) and from France similarly underestimated the severity of the storm.

How bad was it?

The worst conditions were experienced over the period midnight to 6am on August 14th. Several crews estimated winds of violent storm force 11 (56 to 63 knots) with some going even higher. The seas were mountainous: maximum wave heights of 40ft-44ft were reported while rescue aircraft reported winds of 60 to 65 knots and wave heights of 50ft-60ft.

Many competitors felt the sea conditions caused the most damage, particularly as there was a rapid wind veer when the storm moved quickly through the area, leading to unaligned winds and waves and a confused sea state.

Why the forecast failure?

The inquiry summed up the shortcomings of weather forecasting in that era: “There is at present no method of predicting with any certainty when a depression will deepen rapidly in the Western Approaches to the British Isles; so gales which arrive with little warning are a feature of our weather . . .”

Computer forecasts were only beginning to emerge at that time. Operational weather forecasting was almost exclusively based on hand-drawn charts, and meteorologists typically targeted the weather over the next 24 hours. These forecasts could be quite accurate but in rapidly developing extreme weather events the success rate was poor.

A fresh look at the storm

It may seem slightly whimsical to keep track of old forecasts but there is a huge interest in this field. The weather observations that determine the starting state of the atmosphere may be unchanged but the software tools available to assimilate the data and squeeze out more information on the structure of the atmosphere has advanced enormously.

This modelling approach comes under the grand title of Numerical Weather Prediction (NWP). With an improved description of the initial state, NWP can provide much more accurate forecasts compared with the old manual methods. Revisiting old weather with NWP provides insight into our changing climate and can also be useful for testing new developments in the models.

ERA5, an EU re-analysis project, is producing global analyses of the weather every hour from 1950 to the present. Over the critical period of the storm, these analyses show peak surface wind speeds of 40 to 45 knots ie gale to strong gale force, on the southwestern flank of the storm; the figures are at odds with the historical estimates.

As the global analyses are limited to picking out large scale features, a more detailed description of the storm can be generated by performing a re-analysis at finer scale. This is expensive but the cost can be reduced by running the finer NWP model over a limited geographical region, with ERA5 data acting as a guiding hand.

‘Kay’ gets to grips with the storm

The Irish Centre for High-End Computing provides powerful computer facilities for researchers. In collaboration with Dr Paul Nolan, the storm was investigated by running the “WRF NWP model” on the Kay supercomputer with a resolution of every 2km over the area covering Ireland and Britain. New analyses were performed every three hours using the observations available at the time, supplemented by observations from the yachts which were recorded and corrected after the disaster.

The high-resolution (2km) analyses agree more closely with the experience of the race competitors: peak surface winds in the hours around midnight on the 14th are much stronger than those from ERA5, touching violent storm force 11 and are consistent with the winds and sea conditions experienced by the mariners.

Would a forecast based on today’s models have done any better?

A forecast was made from one of the new analyses to see whether advanced warning might have been possible. A forecast was launched from the midnight analysis on the 11th, just before the race start, verifying at 3am on the 14th, the time of maximum storm intensity. It showed extreme wind conditions, and would certainly have alerted the organisers to the possibility of a severe storm. This could have signalled a delay in the race start, or persuaded less experienced sailors to pull out of the competition.

The remarkable accuracy of the forecast using modern methods highlights the “quiet revolution” that has taken place in NWP over the past few decades and the huge strides that have been made in our ability to provide advance warnings of extreme weather.

George Gabriel Stokes, the Irish man who together with Claude-Louis Navier provided the mathematical foundations that underpin NWP – the Navier-Stokes equations – would have been proud of this achievement. Coincidentally, he was born 200 years ago today.