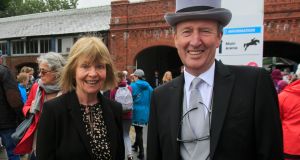 Minister for Transport Shane Ross and his wife, Ruth Buchanan, at the RDS: “I do not drive a diesel car as suggested nor have I ever owned a Jaguar.” Photograph: Gareth Chaney/Collins

Minister for Transport Shane Ross has been challenged by Cabinet and local colleagues over claims he drives an environmentally friendly car.

However, Mr Ross has defended his driving practice and says he plans to buy a low-emission vehicle shortly.

Replies to parliamentary questions indicate Mr Ross and Minister for Climate Change and Environment Richard Bruton are the only two Ministers out of 15 driving electric or hybrid cars.

But a Cabinet colleague said, “I laughed when I read that he was experimenting with electric cars.”

The senior Minister described Mr Ross’s response to the question as a “smokescreen” because “he has the biggest bloody SUV in Leinster House”.

As part of the national climate action plan, the Government wants 950,000 motorists to be driving electric vehicles by 2030, though Mr Ross has previously stated he thinks 500,000 a more realistic option.

In a carefully worded reply, Mr Ross said “I am currently using a Nissan Leaf electric vehicle 40 in the performance of my official duties. In recent weeks I have been trialing a number of different alternatively fuelled vehicles.”

He made no reference to owning any other vehicle.

But his Cabinet colleague, who declined to be named, said Mr Ross owned a petrol Volvo XC 90, a “guzzler supreme”.

The Minister added that it was a “smokescreen” to say he was driving hybrid or electric cars because he was “in the guzzler last week – a big bruiser”.

Another local politician, who also declined to be identified, said “He might be trying out electric cars but he’s driving around the [Dublin Rathdown] constituency in a jeep-like 06 Volvo diesel.”

One colleague claimed Mr Ross drove a Jaguar but in a staunch defence on Friday of his driving habits, Mr Ross said people were telling “porkies”: “I do not drive a diesel car as suggested nor have I ever owned a Jaguar.”

In a statement, he said he will decide shortly on buying a low-emission vehicle. “For the last six weeks I have been trialing various EVs [electric vehicles] and low-emission vehicles including Nissan Leaf , Volvo XC90 hybrid, Jaguar I pace and Hyundai Kona.

“As Minister for Transport I believe it is only right to lead from the front and switch to nil or low-emission vehicles. The Government is making demands on drivers to do the same and cannot expect a satisfactory public response unless we lead by example.

“In the coming days I will be deciding which low-emissions course to take. In the meantime, I am using a 2006 petrol [not diesel] car for day-to-day duties.”