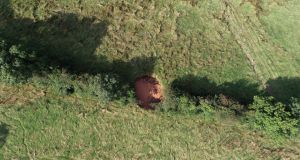 The new crown hole in the Drumgoosat area in Co Monaghan.

A large new hole has opened up on lands attached to an old mining network in Co Monaghan.

The latest subsidence is understood to be in an area two to three fields away from where a sinkhole appeared at Magheracloone Mitchells GAA club in September, 2018.

Gyproc mining company, which operates in the area, has described the latest subsidence as a crown hole rather than a sinkhole.

Sinkholes occur naturally in limestone areas while crown holes, which look the same, are the result of subterranean human activity, including mining.

The new hole which opened up on Saturday is the third separate hole on lands in the area.

In a statement, the company said it is “confident it poses no risk or hindrance to the public. Arrangements are in place to fence around the feature to prevent access and we will continue to monitor the matter as normal.”

It said the crown hole was spotted by a routine drone inspection of the land around the former mine and is located approximately 280 metres north of the local R179 road.

Local resident Geraldine Ward said there was a “huge level of fear” in the local community. She said a total of 15 families had now been affected by holes appearing in the land over the past year.

After 26 years in her home, Ms Ward is worried about the future of the community. “Basically there will be no new homes in this area because of this. I can’t afford to sell my house because no one will buy it. It’s wreaked havoc on our parish.”

Local Sinn Féin councillor Noel Keelan also expressed concern for residents’ welfare following the latest subsidence and criticised the mining group for failing to keep the community fully informed of developments in the area. However, he expressed hope that the LP4900 road in Magheracloone, which has remained closed since December 2018, would reopen by the end of August. “If that happens it would be hugely beneficial to local residents and community life in general. It would certainly take a lot of pressure off the area.”

It is a continued source of concern to locals, some of whom were required to leave their homes following September’s incident.

An area between Carrickmacross in Co Monaghan and Kingscourt in Co Cavan has been mined for gypsum since the early 20th century.

Gyproc has repeatedly apologised for the disruption caused by the land collapse at the local community centre and GAA pitch, and the closure of the L4900 linking the village to the main R179 Carrickmacross-Kingscourt road.

Norma Foley: Maximum number of college places will be made available 09:09
Majority of Ireland’s barristers ‘facing huge drop in income’ during pandemic 09:30
Covid-19: College students on a break and middle-aged people in rural pub linked to large clusters 07:26
Pharmacists to be allowed give flu jab in homes and cars 07:07
Calls on domestic violence to free legal advice centres ‘rise almost a quarter’ in 2019 07:06