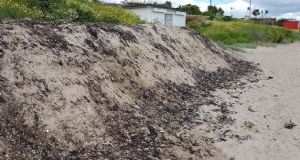 Some of the material deposited by diggers on a Fingal beach. Photograph: Sinead McCoy/An Taisce

Fingal County Council has been criticised by environmental groups and local people for its failure to clear piles of waste that include plastics, wipes, and sanitary products from its beaches.

Staff from the Clean Coasts and Blue Flag programmes, which are wings of An Taisce, met with local volunteer groups in relation to the matter following a number of complaints.

The parties agreed to visit some of the beaches and submit findings and recommendations to the council. These visits to Rush North beach, Rush South beach and Skerries beach were carried out on June 20th.

A report was completed and submitted to the council. At the heart of the criticism were the methods used by contractors on behalf of the council to clean the beaches.

The complainants said the contractors were using mechanical diggers to scrape the beach, removing large quantities of material and depositing it at the foot of dune systems at several beaches.

This practice was being carried out in addition to mechanical beach raking at these sites. During their inspections, the groups noted that the collected material also comprised large deposits of marine litter, sand and seaweed, often in large quantities.

Clean Coasts said much of the material was accessible by children during beach visits over the summer months. Its programme manager Sinead McCoy said it was an “urgent public health and safety issue” and called on the council to have the materials removed.

“We believed there was consensus that this material needed to be removed from the beach immediately and the practice of front-end-bucket scraping of the beaches with diggers discontinued,” she said.

“This initial step has still not been undertaken, seven weeks after the site visits.”

Clean Coasts recommended that manual litter picking was the best means of beach cleaning, but added that in some instances mechanical cleaning with appropriate equipment may be necessary to remove litter items from a beach.

However, the use of mechanical diggers to shift material from one place to another on the beach was “unnecessary”.

An Taisce said it would re-engage with Fingal County Council on how effective beach management can be carried out once the material has been removed and the beach scraping has been dealt with.

It said its staff had worked in good faith on this matter with all parties, but that the issues “have not been addressed with the necessary urgency by Fingal County Council”.