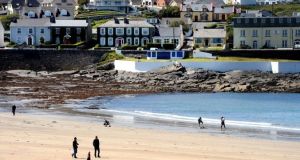 A swimming ban has been imposed at Kilkee beach following a discharge of wastewater into the sea.

The beach in the small coastal town in Co Clare is a popular location with tourists and swimming enthusiasts.

Clare County Council issued a “do not swim” notice on Saturday after the discharge which entered the water via the beach.

“On the advice of the HSE and in the interest of public health, members of the public are advised not to swim or engage in other recreational activities in the water at this time,” said the local authority in a statement.

The discharge is understood to have occurred after a three foot section of storm water piping was overwhelmed by rain water and burst. “Irish Water is aware of the wastewater incident relating to its wastewater infrastructure,” added the council.

The discharge into the beach was contaminated with sewage from the area and the nearby Kilkee Wastewater Pumping Station.

The burst pipe has been fixed so there is no longer a discharge, but tests must now be carried out to determine whether the water has been contaminated with E. coli or other bacteria. The lifting of the notice will be a matter for the HSE.

Clare County Council has raised red flags at the beach until the water quality tests can be carried out. These are expected to occur on Monday, but, due to the lag period between testing and results, the beach is likely to remain closed until at least midweek.

There have been a number of such incidents at Kilkee beach in recent years. Swimming was prohibited there twice in the same week in July 2017 due to an issue with the pumping station.

The previous December, a ban was issued following an emergency discharge which contained elements of waste water.

That incident occurred due to a safety device failing combined with heavy rainfall. The prohibition was lifted in May following repair work at the station.

Meanwhile, the ban on bathing at beaches in south Dublin has been extended until Monday, Dún Laoghaire-Rathdown County Council (DLRCC) has said.

Dublin’s main beaches have been shut down to swimmers for the fourth time this year following another wastewater overflow at the city’s treatment plant in Ringsend.

DLRCC said on Saturday it has taken the decision to extend the temporary prohibition notice for all bathing areas in its locality until 3pm on Monday due to waste water overflows from Irish Water’s treatment network.

The beaches covered by the ban are Seapoint, Sandycove, the Forty Foot, Killiney and Whiterock.

This decision was taken pending test results from Friday, and also as the weather forecast for the weekend is for more rain, which could lead to the possibility of more overflows.

“Testing of water quality was undertaken early Friday,” said a spokesman. “We will continue to assess the risk to water quality based on test results and information provided by Irish Water.

Dublin City Council added Dollymount beach to its list of “no bathing” zones on Friday, saying it would continue to monitor water quality before making a further statement on the matter.

A spokeswoman for the council said on Saturday that testing was continuing to take place.

Seasonal bans are already in place at Merrion and Sandymount beaches due to ongoing issues around bacterial levels in the water.