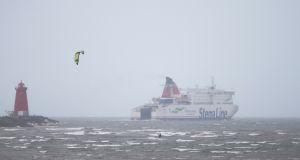 A kite surfer makes the most of the windy weather in Dublin on Saturday. Photograph: Nick Bradshaw

High winds forced the cancellation of a family festival in Dublin on Saturday, while heavy downpours are expected to result in spot flooding in the midlands.

Organisers of the Playstival event at the Airfield Estate in Dundrum said the decision to close the site was taken for public safety reasons. It is expecting the second day of the event to go ahead on Sunday.

“Due to adverse weather conditions including high winds, it is with regret that we have had to close the event site at Airfield Estate for public safety,” it said.

“As the safety of our festival visitors, which includes high number of children, is of paramount importance to us we have had to make the decision to close the event site for the remainder of today.

“We are extremely saddened that the weather has forced us to make this decision and thank you for your patience, support and understanding. We anticipate tomorrow’s event to be open at 9am as expected.”

A meteorologist with Met Éireann said gusts of wind could raise safety concerns around high structures.

“The strongest winds are over the southern half of the country, which are nearing gale force near the coast,” she said. “I would be very concerned along the south and southwest coast.

“We have a front over us. The northern half of the country has moderate northerly winds. There would be safety concerns with high structures.”

“There is a line of thundery showers building and building in the midlands,” said the meteorologist with Met Éireann. “There will be spot flooding and hazardous driving conditions there. That is slowly moving south eastwards.”

Nationally, Saturday night is to be cloudy with showery rain which will clear from the northwest to scattered showers by morning.

Lowest temperatures will range from 10 to 13 degrees and winds will become mostly light to moderate and northwest but fresh to strong at times along coasts. Some patches of mist may develop on hills and coasts.

Sunday will start dull and damp in the east and southeast with outbreaks of showery rain gradually clearing eastward. However, brighter conditions with isolated showers in the west and north will gradually extend country wide during the afternoon.

It will feel cooler than recent days with top temperatures of just 14 to 17 degrees in a moderate north-westerly breeze.