Michael Viney: An appreciation of spring in the winter of his life

Every splurge of energy . . . prompts sitting down for a bit, to contemplate my own, much diminished, kingdom 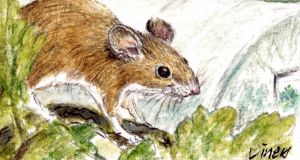 An old man needs somewhere he can talk to himself, uttering ancient curses, flights of rhetoric, speeches from the dock, the odd stentorian cough. On a good day, perhaps a shaky bar or two of Pavarotti, in harmony with Lyric FM.

The polytunnel lights up as the sun clears the mountain, and takes on, at last, the balmy glow of spring. Except for the beastliest days this month, I have set off down the path in anorak, gloves and woolly balaclava, to let the tunnel take them off again. As spring wears on I’ll be down to my T-shirt and fleeing the heat by noon.

But I now live on a battery that’s running down. I once viewed my heart on a hospital monitor and was struck with awe and not a little terror to watch it clenching once a second, again and again and again and again. It has been pumping away inside me, minute after minute, since February 1933: how incredible.

Now, however, I have to succumb to its role in diuresis, much encouraged by Prince Charles’s injunction to his gardeners: “Pee on the compost heap – it adds nitrogen.” Every splurge of energy in the tunnel – kneeling down to plant seedlings, hoisting up again with something to lean on – prompts sitting down for a bit, to contemplate my own, much diminished, kingdom.

Once most of an acre, with hens, goats and a golden rood of barley, it’s down to 10m by 7m under a misty arc of plastic. Four best ridges of the old garden are nourished from draggable bags of pelleted poultry manure, reputedly from happy, non-battery hens. Gone are the years of a neighbour’s rich and ancient cowdung, barrowed down the garden from the generous pile outside my window, buzzing with golden flies.

As I sit quietly, oblivious birds sing counterpoint to Lyric: raven base notes for Sibelius, a pheasant’s bark at Beethoven, Bach with twittering of finches. A robin pauses at the door, then dashes the length of the interior and out the other end. Later it will trust me more, foraging wherever I’ve dug or perching above to scan the canopy for flies.

On occasion, a small flicker of fur has been a house mouse on the search for seeds. I prefer its rural relative, the field mouse, the long-tailed Apodemus. So did James Fairley in his lovely Irish Beast Book of 40 years ago: “There is something exceedingly attractive about Apodemus at rest,” he wrote, “poised, alert and quivering.”

Unfortunately, I’ve met the mouse only at permanent rest, offered by a cat or retrieved from a mousetrap. In the tunnel I have to foil its midnight feasts, perching my sowings of peas or beans on the top of plastic buckets, too slippery to climb.

My father, in different times, used to roll his pea seeds preventively in toxic red lead before sowing them in the soil. I think of him especially when trickling seeds back into a packet down a crease in the palm of my hand. His was calloused and tough, unlike my own.

That was in the war years, when everyone in Britain dug for victory. My father was, perhaps, unusual, cutting a trapdoor in the floorboards to make a root-cellar in the foundations of our small terrace house. He also grew his own tobacco, drying it in the oven, soaking it in molasses and leaving it to cure in a tightly wound cigar. The smell from his pipe was like a bonfire of wet leaves.

Those years at his side must have planted something of my own love of making things grow. The first peep of seedlings is still a small excitement. The leaf shapes’ vast variety, ferny, curling, or cunningly chased and channelled for rain, delights the curious eye.

Thus carrots, lettuces and peas offer more than mere food. But the range of seeds I sow begins to dwindle. No more new roots borrowed from the cuisine of Andean peasants – spuds were a great idea – or things that don’t swell if their bulbs aren’t watered on time.

The lateness of spring finds supplies from the tunnel down to hard tack: thickets of juicy chard, too tender for supermarkets, overwintered lettuce and beetroot. But the broad beans are in flower and waiting for the bumblebees, early potatoes are sprouting rosettes on their ridge, and the climb of mange tout peas is well up the wire.

Tomato plants, sown indoors ahead of the freeze and probably too early, wait out the last frosts beneath the attic window. The tallest, most impatient are a Russian variety, Paul Robeson. Darkly red and delicious, its fruit can be almost as big as my heart. If I refrain from toting sacks, lifting bales or getting a little drunk too often, I can aim, like ol’ man river, to just keep rolling along.