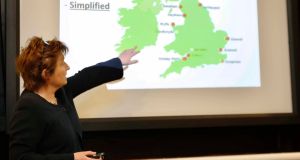 The UK’s nuclear power expansion programme, including the building of the Hinkley Point C facility in Somerset, poses an unacceptable risk to the island of Ireland, according to an alliance of political parties and environmental groups.

Green Party Senator Grace O’Sullivan said the Government “has been dozing at the wheel... and essentially failed the Irish people because we have not had timely opportunity to be consulted” about Hinkley, which is located less than 250km from south east Ireland.

Speaking at a press conference in Dublin, she said the UK government was found to have failed to consult neighbouring states under the UN Espoo Convention.

“People can make their submissions to their relevant local authority. We strongly encourage them to do so before April 17th.”

Given issues around the scale of nuclear expansion envisaged by the UK and its direct implications for Ireland, she said the Government should seek an extension from the UK authorities and give the Irish public a chance to spell out their concerns. The call was supported by the the Green Party, Labour Party, Sinn Féin, Social Democrats and Independents4Change.

The UK is pursuing one of the most ambitious nuclear new-build agendas in the world, and deploying small modular reactors, with a new and untested design.

There are eight new nuclear plants proposed, five of which are to be located on the west coast of the UK facing Ireland, Senator O’Sullivan noted.

Hinkley is due to provide around 7 per cent of the UK’s electricity by 2025 but the project has been hit by delays and cost over-runs.

It was imperative even at this late stage that politicians, organisations, State agencies, and individuals engage with the consultation, she believed, “to highlight their concerns, what they don’t understand or haven’t been provided information on, and what additional safety and mitigation they require”.

She added: “Our own ESRI estimated the worst case scenario would amount to more than €160 billion in economic losses... The HSE warned the Government recently the State has no capacity at present to deal with a nuclear accident.”

There were serious issues with the original modelling done by the UK in assessing the risk of “transboundary impacts” from Hinkley Point C on Ireland in the event of an accident, said Prof John Sweeney of Maynooth University.

“Our promotion of these consultations isn’t about panicking the public, but to ensure that the interests of the Irish public, their health, our environment, our economy, and, in particular our agri-food sector, are protected,” he said.

Irish Cattle & Sheep Farmers’ Association president Patrick Kent said hard questions needed to be asked of politicians “about our ability to deal with a nuclear incident”.

The Guardian reported this week that the UK nuclear regulator had raised concerns with EDF Energy over management failings that it warned could affect safety at Hinkley Point C power station if left unaddressed. It cited documents detailing shortcomings in the way the French firm is managing the supply chain for the £20 billion plant it is building.